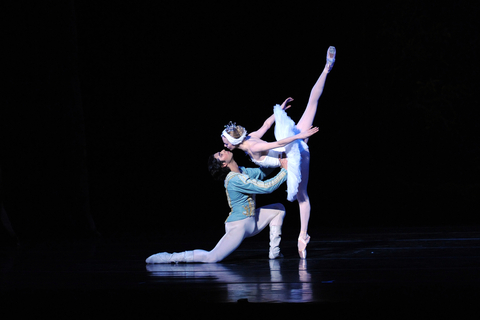 Act I
In the late afternoon.  A meadow near the castle.

Prince Siegfried is celebrating his twenty-first birthday.  His friends, Benno and Wolfgang the tutor have invited guests from the surrounding estates to join in the celebration.  The party is interrupted by the arrival of the Queen Mother, who presents her son with a crossbow and reminds him that it will be his duty at his coming of age to choose a bride from six eligible princesses.  The Queen departs and the festivities continue until Benno sights a flight of swans.  Inspired by his new crossbow, the Prince calls Benno to organize a hunting party and the young men leave in search of the swans.

Act II
Some hours later, after sunset.  By the lake.

As Prince Siegfried enters the forest, he suddenly sees a magnificent swan in flight.  He carefully takes aim, but to his astonishment, the bird transforms into a most beautiful maiden.  At first the maiden is frightened by Siegfried but he assures her he will do no harm and asks her to explain the marvel he has just seen.  She tells him she is the Princess Odette, of high birth, who fell under the spell of an evil sorcerer, and now her fate is to be a swan; only in the hours of darkness may she assume her human guise.  Indeed, this very lake is filled with her mother’s tears.  She tells him she is condemned for eternity, and only if a young man, true of heart, swears eternal love to her and marries her, will the spell be broken.  But, if he should betray her, she will remain a swan forever.  Siegfried realizes his destiny has changed, and swears his love and faithfulness to Odette.  At that moment, the sorcerer appears.  The Prince in his passion reaches for his crossbow, but Odette pleads with him not to shoot, for she knows if the sorcerer is killed before the spell is broken, she too will die.  Dawn approaches, the sorcerer disappears and Odette is compelled by the spell to return to her guise as a swan.

Act III
The next night.  The Great Palace Hall.

Guests assemble for the birthday ball, including six princesses from different countries, whom the Queen Mother has chosen as eligible maidens for her son’s hand.  Prince Siegfried dances with each beautiful young princess, and is urged by his mother to make a decision, but he is haunted by the memory of Odette and refuses to choose a bride.  Suddenly, a fanfare announces the arrival of Baron Von Rothbart with his daughter Odile.  Siegfried is thrilled to see the young maiden, who is the image of his beloved Odette.  He is dazzled by her beauty and vibrance and deceived into declaring his love and fidelity to Odile.  As Prince Siegfried swears his love, a fleeting vision of the real Odette appears and Von Rothbart with Odile triumphantly reveal their wicked ruse.  Siegfried realizes he is victim of an evil plot and exits the great hall in search of Odette.

Act IV
Later that night.  By the lakeside.

The swan-maidens are anxiously waiting the return of Odette.  She appears and tells of Von Rothbart’s treachery. Before dawn, she intends to die.  A great storm rages.  Siegfried, bursting into the glade, discovers the tearful Odette and begs her forgiveness.  As dawn approaches, Von Rothbart appears again in his disguise as a sorcerer.  Odette tells Siegfried she must kill herself, or forever be a swan.  Siegfried, knowing his heart belongs only to Odette, declares he will die with her, thus breaking the power of Von Rothbart.  The lovers throw themselves into the lake.  Von Rothbart is mortally struck and his power is ended.

Apotheosis:  The lovers are untied in life after death.

Perhaps America’s most celebrated male dancer, Edward Villella, was a guest dancer in PBT’s 1970 performance of Act III of Swan Lake. The costumes for the production were designed by Henry Heymann, a University of Pittsburgh professor and a seasoned ballet and opera designer. He created numerous productions for PBT during its first decade. His sumptuous design aesthetic–and his dedication to the Company–helped strengthen PBT at a critical time. This jacket was worn by other dancers every time PBT produced Swan Lake, until 1994.

Since the 1895 première of the Petipa/Ivanov production of Swan Lake in St. Petersburg, it has been a tradition and a challenge for one dancer to perform the dual role of Odette and Odile.  Principal Dancer Maribel Modrono ponders the different qualities required as she prepares for her performance.

This is my third opportunity to perform “Swan Lake” with Pittsburgh Ballet Theatre, and it is always delightful. It requires a great deal of focus to portray each woman with the true content of her being.

Odette is fragile; her trusting nature destroyed by the curse that made her a swan. She is wary; afraid.  When she meets Prince Siegfried, her faith in the goodness of humanity is reaffirmed, and she reveals herself, falling in love and giving her heart completely.  However, she must use a different language to interpret her love for him.  She’s woman, and she’s swan – a woman imprisoned in the body of a bird.

Odile is the antithesis.  She’s the worst kind of person you ever want to meet.  She’s the most beautiful being; but she’s deceptive and filled with malicious intent.  What is so evil about it is that she thoroughly enjoys it.  The enticing thing about dancing Odile is that I can enjoy this alter ego on stage without being that way myself.

The choreography is a challenge both physically and artistically.  Odette, even in her womanly persona, is in flight.  The combination of suppleness and strength in the legs is the most difficult, especially in the Pas de Deux of Act II.  A lot of the work takes place on the left leg.  There is much more pressure on the left side of the body, requiring increased stamina for the whole body.  There are many pirouettes for Odette that are very controlled, because the movement is not all about the leg.  It is the upper body activity that simulates the undulating movements of a bird in flight, reaching beyond that centered leg.  Your center has to be strong and firm so that when you reach beyond that, your balance and artistic line are not compromised.

With Odile, the emotional intensity is of a different kind.  Instead of fearful and apprehensive control, she proceeds with calculated, yet wild abandon.  It is all technique and coordination.  Something else seems to take over.  When you hear that music in Act III, it just wells up inside of you, and you can’t hold back.  It is so much fun!  I was asked if I count my ‘fouettes’ to accomplish the famous thirty-two.  I used to, but sometimes that works against you.  It requires so much stamina and endurance to complete those turns that if you are getting tired and realize you’re only on number twenty-three, it makes it difficult to finish.  Now, I don’t count.  I just feel it in the music, and that carries me through.