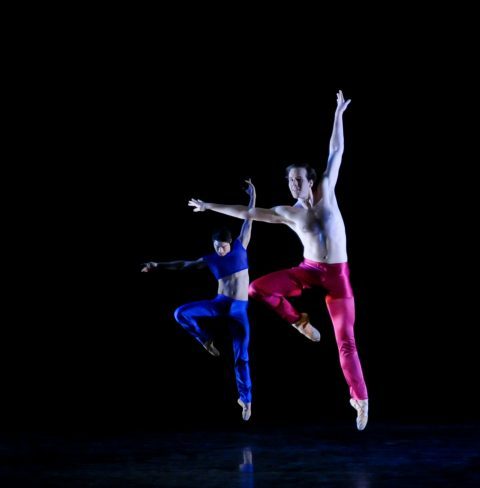 From the beginning Dwight Rhoden knew that the music would drive “StrayLifeLushHorn”.  Having been called “a master of invention”, he knew that he could use his talents as a choreographer and collaborator to honor the music of Billy Strayhorn and confirm its timelessness.

During his collaboration with Duke Ellington, Strayhorn wrote music full of energy, heart and soul.  It is as vibrant now as it was when it was first composed.  Rhoden chose pieces from each era of the Strayhorn/Ellington relationship to show the range of the music, with all its variations and nuance of mood and sophistication.  By using this broad range Rhoden had the chance to show his range as a choreographer.  He describes this ballet as having a “contemporary edge with a lot of stylistic things rhythmically and in the movement, merging the music and movements of today and yesterday.”

A collaboration of jazz and ballet seemed unlikely at the outset.  No one was sure just exactly where it would lead – the exact atmosphere in which Dwight Rhoden is comfortable.  “Part of the art [of choreography] is sometimes not knowing where you’re going.”  Watching the dancers as they experiment with movement nurtures his creativity.  As dancers and choreographer work together, “a dancer may unexpectedly get into a position where the body begins to fall.  Sometimes you just have to let it fall; and the result may be a movement that is new, refreshing, and innovative.”

Dozens of Strayhorn compositions were reviewed to choose the final nine selections for “StrayLifeLushHorn”, striving to create a balance between Strayhorn’s well known works and his more obsure, orchestral in nature, masterpieces.  Two compositions selected – “Schwiphti”, the second movement from Suite Thursday, which was commissioned in 1960 by the Monterey Jazz Festival, and “Far Eastern Weekend” which was written in 1957 for and with the great Ellington Band drummer Louie Bellson – were so rare that no music could be found and the works had to be transcribed from the original recordings by Pittsburgh’s Dr. John Wilson.  “Tonk”, written in 1940 as a mini-piano concerto for Duke Ellington, was often performed at parties by Strayhorn and Ellington sitting together, playing four hands on one keyboard.

“Lush Life” and “Something to Live For”, works from the late 1930’s, have become two of Strayhorn’s most recognizable melodies with lyrics, performed here with vocals, giving the full impact of the compositions.  ”RainCheck”, “Chelsea Bridge”, and “Take the A Train” were all written during the 1939-41 Duke Ellington/Jimmy Blanton Band era, which was a prolific time for Strayhorn.  The Ravel-like “Chelsea Bridge” was made famous by tenor sax legend Ben Webster, and “Take the A Train” has gone on to become one of the most recorded compositions of all time, with this rendition offering the musicians space to improvise solos making each night a new experience for the dancers.