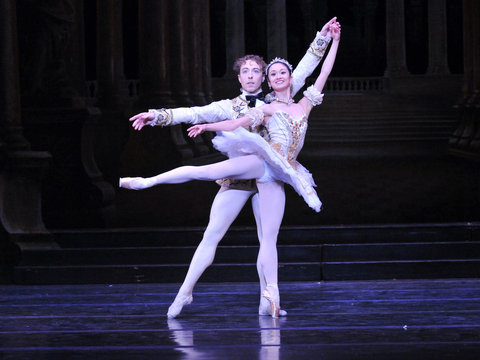 The court of King Florestan XXIV is celebrating the christening of Princess Aurora.  The courtiers are assembled around her cradle as the festivities begin.  The King and Queen enter, followed by six fairies and their cavaliers.  Each fairy dances, offering her special gift to the infant princess.  Suddenly, before the Lilac Fairy presents her gift, the wicked Fairy Carabosse interrupts the ceremony.  Angry because she was not invited, Carabosse delivers a curse upon the princess.  She will grow up to be beautiful, but before her sixteenth birthday she will prick her finger and die.  The Lilac Fairy intervenes, promising that the princess will not die, but only sleep until she is awakened by the kiss of a prince who loves her.

It is Princess Aurora’s sixteenth birthday and it seems as though she has triumphed over the evil curse of Carabosse.  Her Father informs her that she is to select one of four visiting princes as her husband.  Aurora dances with the princes, each of whom offers her a rose and declares his love.  As the celebration continues, the disguised Carabosse hands Aurora a bouquet in which a spindle is concealed.  Aurora pricks her finger.  As she falls, the Lilac Fairy appears and casts her spell.  The entire kingdom is put into a slumber to await the prince who will come to break the spell.

The court is celebrating the wedding of Princess Aurora and Prince Desire.  The Lilac Fairy and all the Fairy Godmothers share in the kingdom’s joy.  Fairy tale characters come to dance at the magnificent celebration.  At the conclusion of the wedding, the King and Queen crown Aurora and her prince as the Monarchs of the kingdom.