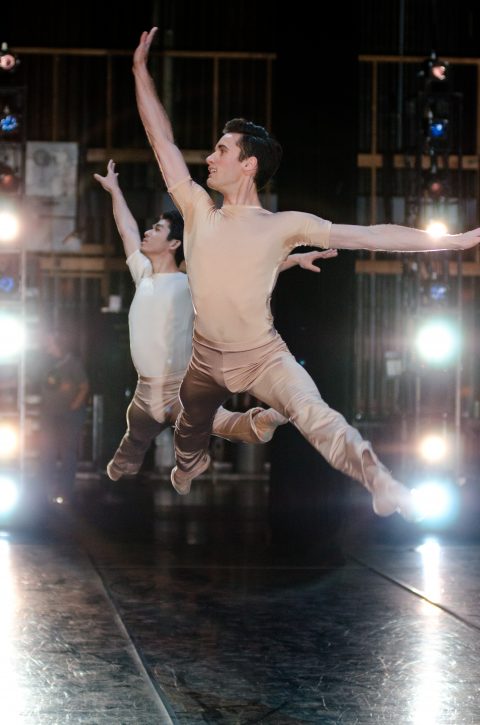 Sinfonietta is perhaps my most spontaneous work. This is not by aim, but because of the extremely limited time and conditions in which it was created. (In the summer of 1978) the company, Nederlands Dans Theater (NDT), was floating and had no definite plans for the future. I received a telephone call from Joseph Wishy, then director of the Spoleto Festival in Charleston, South Carolina, who asked me whether I had ever heard of the composer Leoš Janáček. I answered that I had known of him since my studies at the Conservatoire in Prague (I started studying there in September of 1962) and that I always wanted to create a choreography to the music of his glorious Sinfonietta — however the task seemed to me to be filled with such an enormous responsibility that I never had the courage. But I felt that I knew Janáček’s music inside out: my bones and veins were soaked in it. I was advised not to accept the offer to choreograph this work for the Festival, as the production time allotted to us would be severely limited. Tickled by a sense of adventure and feeling that the time was right, I said yes. Walter Nobbe, the costume and décor designer of Sinfonietta, supported me in the decision. Sold to the devil — now we had to make it. Rehearsing whilst on tour in Israel, asking the dancers to work overtime and myself working impossible hours, we made it. And the result certainly reflects the spontaneity in which it was created, conditioned by the lack of time and the feeling of having to perform an impossible “balancing act.” But by any account, the effect it had on the people who saw it first was quite remarkable. The audience at the premiere in Charleston was unable to hear the last “fanfare” of the music, because they were standing on top of their chairs, cheering and throwing their program books into the air. Sinfonietta — this work in which simplicity is one of its major characteristics — tore the company out of depression and obscurity. It became a cornerstone of the repertoire of the Nederlands Dans Theater, opening endless new possibilities for the company’s future.

— adapted from notes by Jiří Kylián