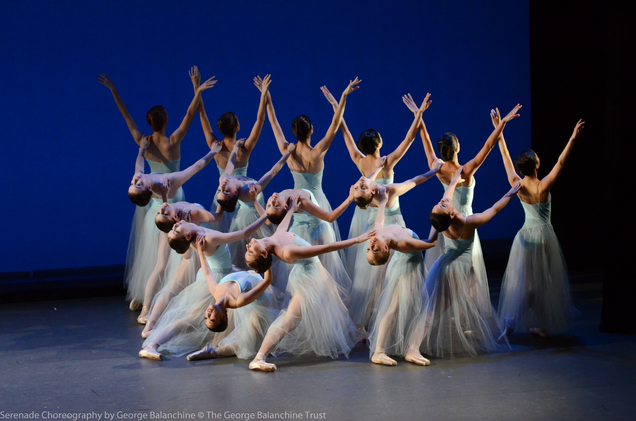 The woven complexities of the captivatingly beautiful Serenade disguise the fresh and delightful story of its origins, a beginning that played a significant role in the seeds from which the renowned New York City Ballet grew.  This testimony to the road a dancer must travel from student novice to ballerina was choreographed by the unequalled George Balanchine.  In his own words from Balanchine’s New Complete Stories of the Great Ballets, he expresses his feelings of the relationship between music and dance, particularly this piece:

“Named after its music – Tchaikovsky’s ‘Serenade in C major for String Orchestra [Opus 48]’ – ‘Serenade’ tells its story musically and choreographically, without any extraneous narrative.  Because Tchaikovsky’s score, though it was not composed for the ballet, has in its danceable four movements different qualities suggestive of different emotions and human situations, parts of the ballet seem to have a story:  the apparently ‘pure’ dance takes on a kind of plot.  But this plot, inherent in the score, contains many stories – it is many things to many listeners to the music, and many things to many people who see the ballet.

To tell a story about something is simply a very human way of saying that we understand it.  Making a ballet is a choreographer’s way of showing how he understands a piece of music, not in words, not in narrative form (unless he has in mind a particular story), but in dancing.”

Balanchine always made it clear that his plotless ballets were created for the beauty of the movement and its relationship to the music.

This Serenade is a sumptuous piece for string orchestra.  Tchaikovsky told his benefactor Mme von Meck that he was writing a piece that was “entirely heartfelt.”  The four movements express a wide range of emotions with an amazing breadth of tonal colors and nuances.  Sonatina, Waltz, Temo Russo (Russian Dance) and Elegy are performed without interruption.  The last two movements are actually in reverse order from the musical score.  Balanchine choreographed the first three movements for his students in 1934, but in 1940 he set the fourth movement, Russian Dance, for the Ballet Russe de Monte Carlo.  Since he wanted the ballet to end on a somber, quiet note as originally choreographed, he inserted this vigorous movement before the Elegy.

Before its evolution to a sophisticated ballet for highly trained dancers, it had innocent beginnings as an instructional piece for young dancers to learn how to perform on a stage.  In 1933 a young and bold Lincoln Kirstein invited choreographer George Balanchine to come to America and start an American ballet company.  Balanchine responded, “But first, a school.”  In American Dancer (later Dance Magazine), the School of American Ballet (SAB, the official school of the New York City Ballet), was advertised as giving “A complete education in the art of dance, toward the creation of an American Ballet Company.”  A mere ten weeks after the school opened its doors Balanchine began work in his advanced class on a piece called Serenade, his first American ballet.  To give these students some idea of how dancing on stage differs from classwork, he used the steps they were learning, but “Serenade had little to do with ‘steps’ and everything to do with dancing.”  The dramatic moments came by happenstance: a girl arrives late to class and hurries to take her place; another girl falls as she leaves the stage and is reduced to tears.  The choreographer never knew exactly how many students would be in class on any given night, so the ballet begins with a group of seventeen girls.  In the second class it continued with nine, and in the third, six.  A young male dancer shows up, then another.  Each is incorporated into the whole, magnificently and yet quietly.  According to critic, Edwin Denby –

“He had to find a way for Americans to look grand and noble, yet not be embarrassed about it.  The Russian way is for each dancer to ‘feel’ what he is expressing.  The Americans weren’t ready to do that.  By concentrating on form and the whole ensemble, Balanchine was able to bypass the uncertainties of the individual dancer.  The thrill of ‘Serenade’ depends on the sweetness of the bond between all the young dancers.  The dancing and the behavior are as exact as in a strict ballet class.  The bond is made by the music, by the hereditary classic steps, and by a collective look the dancers in action have unconsciously – their American young look.  That local look had never before been used as a dramatic effect in classic ballet.”

Serenade premiered for the first time on July 9, 1934 on an outdoor stage in White Plains, New York.  The first performance was rained out after the first moments, but the next day they tried again.  The audience was at least as large and more notable.  The performance was a huge success.

Serenade remained one of Balanchine’s favorite ballets, which he performed and transformed and gave to many companies.  It became the signature piece of his New York City Ballet and continued to be part of the repertoire even when many of his other ballets were forgotten.  Dance writer Walter Terry captured Serenade perfectly in this review:

“[Serenade] presents that beauty which is the province of dance alone, the beauty of highly trained bodies moving rhythmically through space, experiencing adventures in design, exploring the air in leaps, exploiting the endless possibilities of movement sequence.  There is beauty also in the almost intangible theme of ‘Serenade,’ in the communication of romantic searching, of waiting, of longing, of finding.”