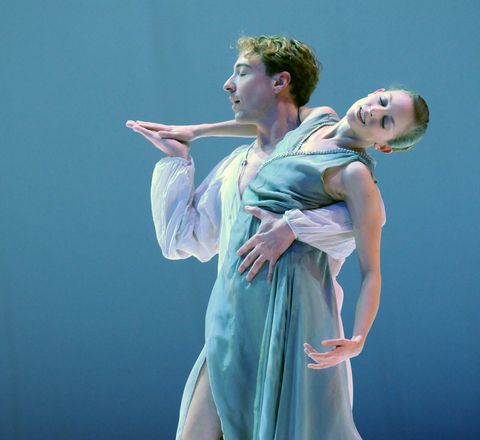 Friar Laurence, a strange and tortured character, is the fil-rouge throughout the play, from the beginning to the end. He plays the part of a figure of the Trinity torn between good and bad, tossed between chance anc necessity, between wanting and power. A manipulated manipulator, he is the principal “actor” in this tragedy; just when he thinks he is providing the key to happiness, he is in fact the cause of great tragedy. It is thus that he first appears in Act I to show just how much the story of Romeo and Juliet–their death, their meeting, their love–owes to chance. He evokes the tragedy that starts in a Veronese street which Romeo just happens to cross; an argument breaks out between Mercutio, Benvolio, and Tybalt…

While Juliet is amusing herself in her bedchamber with her Nurse, the young girl’s mother–a symbol of the double parental authority–comes in to tell her that Count Paris has asked to marry her.

Scene 3–Preparations for the Ball
(Lady Capulet and Tybalt/ Enter the Guests and Count Paris/ Romeo, Mercutio, and Benvolio go to the Ball/ Enter Rosaline)

Inside the Capulet’s palace, preparation for the ball is underway. Mercutio and Benvolio decide to go disguised in masks and persuade Romeo to accompany them.

The ball is in full swing in the Capulet’s palace. Romeo is trying to make an impression on the beautiful Rosaline, who steals away. It is Juliet who first notices the young man; the attraction is immediate. Tybalt recognizes the intruder and puts a stop to this first decisive meeting.

Standing on the balcony of her bedchamber, Juliet is thinking about her evening. Romeo, whose friends are seeking him everywhere, appears in the garden and declares his love for her.

Scene 6–The Street
Friar Laurence/ Mercutio, Benvolio and their friends/ Enter Romeo/ The Puppets/ The Message

Romeo rejoins Benvolio and Mercutio in the middle of the festivities, the masks and puppets in the street. The Nurse gives him a letter from Friar Laurence, on behalf of Juliet, arranging a meeting at the Friar’s home so that he may bless their marriage.

Hoping this marriage will stop the feuding between the Montague and Capulet families, Frair Laurence has agreed to marry Romeo and Juliet. The marriage is performed under the sign of the ring of Mobius–the symbol of an indestructable link, infinity, an eternal return–because their love will never end, not even in death.

Tyblat is looking for a fight with Mercutio and Benvolio. Romeo tries to calm things, but Tybalt kills Mercutio. Though Romeo is a pacifist, he is also a man of honor nad must therefore seek revenge for his friend’s death. Romeo challenges the Montague’s enemy to a duel and deals him a moral blow.

Before fleeing to Mantua, Romeo takes his leave of Juliet. The separation is painful, Juliet cannot bear it and is even more distressed at the thought of marrying Paris, as announced to her by Lady Capulet, who enters the bedchamber with the suitor. Utterly appalled and outraged, Juliet asks Friar Laurence for advice.

Friar Laurence’s idea is for Juliet to drink a potion that will lead to simulated death. Once buried, she will escape and join Romeo, who will have been forewarned by Friar Laurence. However, the Friar cannot get hte message to Romeo, who, crazed by sorrow, kills himself. Juliet wakes up, realizes what has happened and decides to join Romeo in eternal love.