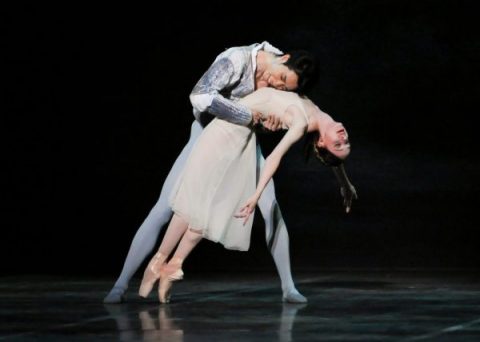 Act I Scene I – The Market Square.  The city of Verona is split by a feud between the Montague and Capulet families. Romeo, a young Montague, is paying court to fair Rosaline. The town comes to life. Romeo, Mercutio and Benvolio encounter the Capulet Tybalt and his retainers and a quarrel develops. The quarrel is interrupted by the arrival of the Prince of Verona and peace is temporarily restored.

Scene II – Juliet’s Anteroom.  Juliet is playing with her companions and her nurse. Her parents, Lord and Lady Capulet, arrive with Paris, a young man whom they have chosen to be her husband.

Scene III – Outside the Capulet House.  The Capulet family welcomes its guests to the masked ball. Lord Capulet greets his guests including Rosaline, who is pursued by Romeo, and Paris, who is still seeking Juliet’s hand in marriage. Romeo, Benvolio and Mercutio join the ball in disguise.

Scene IV – Inside the Capulet House.  The masked celebration begins. Juliet enters with her friends. Romeo and Juliet meet and are captivated by each other. As they dance together, Romeo is recognized by Tybalt who tries to throw him out of the house. Lord Capulet intervenes and the guests start to depart. Scene V – The Capulet’s Garden Juliet is standing on her balcony dreaming of Romeo. Romeo arrives and they dance, declaring their eternal love for each other.

ACT II Scene I – The Market Square.  The following day in the market square, Juliet’s nurse arrives with a letter for Romeo. Romeo reads that Juliet has arranged for Friar Lawrence to marry them secretly in his chapel later the same day.

Scene II – A Chapel.  Romeo arrives at the chapel to be greeted by Friar Lawrence. Juliet arrives and the two lovers are married.

Scene III – The Market Square.  Tybalt comes to the market square looking for Romeo. He tries to provoke Romeo to fight and, when Romeo refuses, his challenge is taken up by Mercutio. In the ensuing fight, Mercutio is killed. On seeing his friend slain, Romeo takes his revenge and kills Tybalt. Devastated by Tybalt’s death, Lady Capulet seeks revenge. The marketplace empties as Lady Capulet mourns her loss.

ACT III Scene I – Juliet’s Bedroom.  Having spent their wedding night together, Romeo wakes to realize that he must leave Juliet and Verona before he is discovered. Lord and Lady Capulet arrive to prepare for Juliet’s marriage to Paris. Juliet announces her refusal to marry Paris and her parents are furious. In despair, Juliet runs to Friar Lawrence to seek his help.

Scene II – A Chapel.  Arriving at the Chapel, Juliet explains her predicament to the Friar. He has a solution. She is to drink a potion that will send her into a deep sleep. Thinking her dead, her parents will place her in the family crypt. Meanwhile, Friar Lawrence promises to tell Romeo of the plan. Romeo will return at night to carry Juliet away when she awakes. Juliet foresees herself reunited with Romeo.

Scene IV – Juliet’s Anteroom.  Juliet’s nurse and friends arrive to prepare Juliet for her wedding, but when they try to wake her she appears to be dead. The wedding turns into a funeral.

Scene V – The Capulet Crypt.  Juliet is laid to rest in the Capulet crypt. Romeo arrives. Not knowing of Friar Lawrence’s plan, he believes Juliet to be dead. He finds Paris and in the fight that follows, Paris is killed. Overcome with grief at the death of Juliet, Romeo poisons himself. Juliet wakes and finds the bodies of Paris and then Romeo in the crypt. Unable to live without Romeo, she takes her own life.