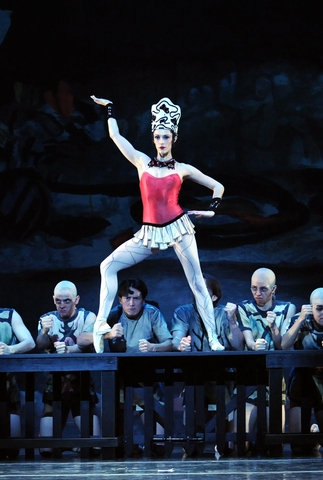 Former New York City Ballet dancer Elyse Borne staged both Agon and Prodigal Son for Pittsburgh Ballet Theatre. Ms. Borne is a member of a small group of repetiteurs who worked under George Balanchine and who routinely set his ballets. She calls preparing to stage one of Balanchine’s works an “enormous study event.” Viewing as many film and video versions of the ballet as she can find, she painstakingly compares each step to reach a better understanding of what Balanchine originally intended. Ms. Borne notes that Agon and Prodigal Son are two of the most difficult of Balanchine’s ballets to stage and to dance.

Balanchine created Prodigal Son in 1929, when he was Serge Diaghilev’s 24-year-old ballet master at the Ballet Russes. He revived it in 1950 for New York City Ballet with Jerome Robbins in the title role and again in 1960 with Edward Villella. Set to the richly expressive music of Russian composer Sergei Prokofiev, Prodigal Son is a story ballet based on the Biblical parable in the Gospel of Luke.

The tale is of a young man who rebels against his father’s authority and leaves home to experience the world. Villella has said that the climactic leap (which became his signature) made by the Son in the confrontation with his father symbolizes the boy’s “angry, and maybe desperate, determination to get away.” The Son soon succumbs to the lure of decadence; in the end he is pitifully, painfully broken by his experiences. He returns home to ask his father’s forgiveness. The role, one of the greatest for a male dancer, presents a tremendous dramatic challenge.

Balanchine paired the ancient story with experimental choreography that after 80 years is still seen as daring and innovative. In the pas de deux with the Son and the Siren, the Siren sits on the Son’s neck—balancing there without any other support—in a pose that symbolizes her dominance over him. (The characterization of the Siren deeply offended Prokofiev, who envisioned her as demur; as a result he refused to pay royalties to Balanchine.) As the ballet progresses, the Son’s choreography is drastically pared down. His movements are the physical expression of his journey: from highly adventurous steps to, with his legs broken, no steps at all. The Son crawls to his father’s outstretched arms in one of the most moving scenes in all of ballet.