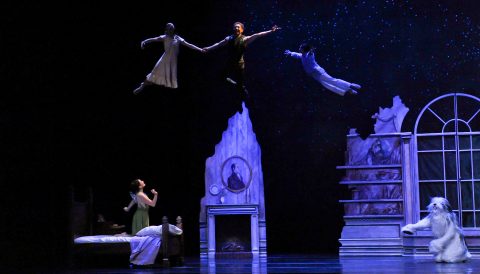 At the Darling family home in London, young Wendy dances in her bedroom with Nana, the faithful family dog. Her brothers John and Michael arrive and join in the fun. Mrs. Darling and Liza the maid enter to ready the children for bed. Mr. Darling arrives and is worried about being late for a dinner party. After the boys pretend to be pirates and kidnap Father, the playful children foil all of Mother’s attempts to get them into bed and convince their parents to tell them a story. Finally peace is achieved and with the children drifting off to sleep, Mother and Father leave for the dinner party.

When the coast is clear, Tinker Bell enters the nursery in search of Peter’s shadow, which he lost while listening at the window to Wendy telling stories to the boys. After madly searching the room she finally finds it in the washstand. Peter enters and tries frantically to catch his shadow. Unable to do so, he slumps down beside Wendy’s bed and begins to cry.

Wendy awakens to see Peter crying and offers to sew his shadow back on. She is quite taken with Peter and seems to have a vague recollection of him. She offers him a kiss and when he doesn’t know what that is, gives him a thimble. Peter invites Wendy toNeverland where she can be the mother and tell stories to the Lost Boys. Meanwhile Tinker Bell is very jealous and upset at Peter’s attention to Wendy. After accepting Peter’s invitation, Wendy wakens John and Michael who are overjoyed to see Peter and Tinker Bell in the nursery. All three children have a quick flying lesson and with the help of Tinker Bell’s fairy dust take off through the nursery window. After flying over London they are off to adventures in Neverland – second to the right and then straight on till morning!

In Neverland, Tiger Lily, the Fairies and the Crocodile are in the lagoon when they hear the pirates coming and quickly hide. Smee tells Captain Hook that Peter has returned to the island with new treasures when suddenly the Crocodile appears and tries to get another taste of Hook.

Peter brings the children to the Fairy forest where all of the sprites dance in celebration. The Lost Boys arrive and everyone is happy that Peter has returned to Neverland. But the merriment does not last long when the Pirates challenge Peter and the boys to a fight. Dueling with Hook, Peter is almost defeated, when just in the nick of time the Crocodile chases Hook away.

In London, Mr. Darling and Liza try to console Mrs. Darling who is heartbroken over the disappearance of the children. Meanwhile in Neverland Wendy has settled into the role of Mother to the Lost Boys. When Peter goes to check on the island, Wendy and Tinker Bell give the boys their medicine and tuck everyone into bed for the night unaware of the adventure just ahead.

The Pirates enter the underground home and capture all the children. Only Tinker Bell escapes! Captain Hook, disappointed in not finding Peter, poisons the medicine bottle in hopes that he will drink from it when he returns. Later as Peter gathers his sword and his courage before heading out to save the children, he remembers to take his medicine. But before he can, Tinker Bell drinks it herself to save Peter’s life. Tinker Bell begins to fade despite Peter’s attempt to revive her. She slips away. Only the Fairies, having sensed Tinker Bell weakening, are able to revive her by dancing until she is magically resurrected.

On the pirate ship the new “recruits” are put to work. Peter flies to the ship and after a fierce battle defeats Captain Hook and the pirates. After celebrating their victory, Peter begrudgingly agrees to take Wendy, John and Michael home. Wendy is worried that her brothers are forgetting their real parents. The Fairies fly the ship home, where the children surprise Mrs. Darling in the nursery. Mr. Darling, Nana & Liza hear the commotion and rush in where they are introduced to the Lost Boys who have decided it is time to grow up. After the others leave the nursery, Wendy returns, having sensed that Peter is still nearby. He has been waiting outside the window. After a tender moment, with Peter promising to return, Wendy watches him fly off into the stars. And on to another adventure!

Peter Pan on Stage and Screen

Peter Pan began as a vignette within a novel by author and playwright James Matthew Barrie. A play and novel followed—and a world-wide phenomenon was born. The story continues to capture the imagination of both children and adults and has remained in the forefront of the entertainment arts for more than a century. A few highlights from Peter Pan’s production history:

1902 – Peter Pan appeared as a story in the novel The Little White Bird, written for adults.

1904 – Barrie befriended Arthur and Sylvia Llewelyn-Davies and their five sons after meeting them in Kensington Gardens in London. His play, Peter Pan or The Boy Who Wouldn’t Grow Up, emerged from those relationships. The play took England and the United States by storm in 1905.

1906 – The section of The Little White Bird that originated the story of Peter Pan was published separately as Peter Pan in Kensington Gardens.

1911 – Barrie rewrote his enormously successful 1904 play as the novel Peter and Wendy.  The names of the Llewelyn-Davies children were used for characters in the story: George (Mr. Darling), John, Michael, Nicholas, and Peter.

1924 – Barrie gave the copyright for Peter Pan to the Great Ormond Street Children’s Hospital in London. Since then the Hospital has received considerable income from the licensing of Peter Pan productions and products. Also in this year the first film version of Peter Pan, a silent movie, was released.

1950 – Peter Pan was produced on Broadway, with music by Leonard Bernstein. Jean Arthur starred as Peter and Boris Karloff was Captain Hook/Mr. Darling.

1953 – Walt Disney released his animated feature film, Peter Pan. 15-year old actor Bobby Driscoll, who voiced Peter, was the first male actor to play the role in a major production. Tinker Bell became one of Disney’s most important icons—the character is still featured in the opening credits of all Disney films.

1954 – The stage production of Peter Pan, directed by Jerome Robbins and starring Mary Martin, opened on Broadway. Martin said that in the role she could feel “the freedom of spirit that was Peter Pan.” Sandy Duncan and Cathy Rigby played Peter in subsequent revivals.

1955 – The 1954 Broadway show was broadcast as an historic, live, color-television event.

2006 – Peter Pan in Scarlet by Geraldine McCaughrean, the only authorized sequel to Peter Pan, was published.

Interview with Jorden Morris
Excerpted from an interview with the Royal Winnipeg Ballet, with additional information provided to Pittsburgh Ballet Theatre.

In 2004 Royal Winnipeg Ballet Artistic Director Andre Lewis approached Jorden Morris about choreographing a ballet based on the Peter Pan story. Creating a full-length story ballet is a challenge in any circumstance: creating a ballet based on a story as beloved and well-known as Peter Pan is a formidable undertaking. Mr. Morris signed on immediately.

In a Royal Winnipeg Ballet interview, Morris gives some insight into the creative process:

What drew you to Peter Pan?

The sense of wonder and magic that surrounds Peter and Neverland—the characters and how clear and fantastic they are—the endless possibility of imagination he (author J.M. Barrie) writes about.

What was the first thing you thought about?

The music, and how it had to work/fit with the characters. The music came about from the desire to use composers that were writing and performing music while J.M. Barrie was writing the book. It’s quite possible that Barrie might have attended concerts of these composers . . . and perhaps “heard” some of the characters in the music. The Montague Phillips and Eric Coates have that “London” soundscape I was looking for as well as certain characters’ theme music. Elgar gives us the Neverland and ship scenes, plus character themes for Tink, Tigerlily, and Croc.

On the experience of choreographing a full-length story ballet:

You need to plan for sleepless nights, endless hours with the music score, lots of headaches and discarded ideas/choreography. . . .but really, you need to have a relationship with the music that goes far beyond knowing it and liking it. You need be aware of how the movement fits the dancers and why. In a story ballet like Peter, you have to decide what scenes and chapters are going to be the character-building scenes, which ones are going to advance the plot, and which ones are going to create an emotional situation or reaction. Then (you have to) figure out how to put them all together as seamlessly as possible.

Favorite moments in the ballet?

I have several favorite moments: Tinker Bell’s entrance; the “Boy Why Are You Crying” pas de deux (in Act I); the pas de deux between the mother/father at the top of Act II; Tinker Bell’s resurrection (Act II). The final outcome of these scenes is exactly what I saw in my imagination.