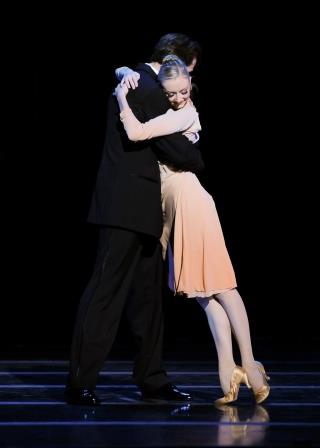 Nine Sinatra Songs presents a glamorous portrait of seven couples that traces the arc of romantic relationships. The dancers swing, swirl, tango and cha-cha through a glittering ballroom.

Tharp created the ballet in 1982, following her Sinatra-inspired duo, Once More Frank, and in the wake of her research of turn-of-the-century exhibition/ballroom dancing (and the partnering of the famous dance couple, Irene and Vernon Castle) for the movie Ragtime. It is one of Tharp’s most frequently performed works and has become a mainstay in the repertories of professional dance companies worldwide.

Tharp chose only songs with arrangements from the 1950s and 60s. That was when, as she describes it, “my parents were still together, when all parents were still together. . .(it was) the last time we assumed as a culture that of course men and women lived together and loved for a lifetime.” Each of the songs presents its own take on a particular phase in a relationship and has its own musical and dance/theater character. Tharp was inspired by Sinatra’s classic interpretation of the song material. She also in recent years credits 19th-century novelists, including Tolstoy and Balzac, whose works she says taught her about the psychological reality of love and relationships.

The opening, “Softly, As I Leave You,” is a portrait of young love, a free and romantic duet filled with youthful abandon. A smart, tango-flavored “Strangers in the Night” reveals an emotional distance between the couple. “One For My Baby,” is sexy and playful, a couple in late-night, knowing rapport. “My Way” re-gathers the first three couples; and then a fourth pas de deux lends tart, comic relief with “Somethin’ Stupid.” Unhurried and subtle glamour bathes the solid and trusting couple in “All the Way.” “Forget Domani” is a true showpiece—this duo plays it straight, fast, front and center, with a very Hollywood feel. The final couple is engrossed in a battle of wits and maneuvers: dancing to “That’s Life,” they engage in a fast and furious one-upmanship said to be in the style of an Apache dance (a highly dramatic dance associated with early 20th century Parisian street culture). A reprise of “My Way” brings all the couples together, each maintaining their own distinctive character but also displaying unifying movements that hint at universal themes in love and relationships.