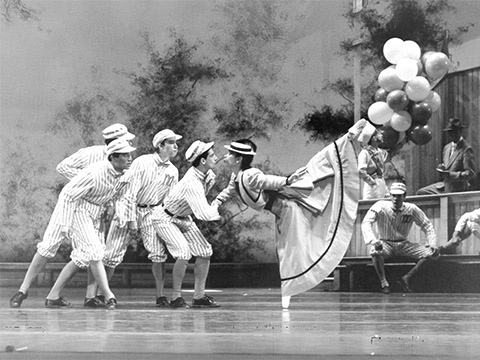 Building a ballet means incorporating the artistic elements of a story, music, choreography, costumes, scenery, and lighting into one unified and seamless production that an audience can enjoy as a whole.  At the same time, each element should be noticed and appreciated for its own beauty and uniqueness.

In 1989 Patricia Wilde (then Artistic Director of Pittsburgh Ballet Theatre) was invited to submit a proposal to Performing Arts for Children (PAFC), a Pittsburgh-based organization dedicated to presenting high quality theater performances for children and families, for the building of a new ballet.  Many ideas for a story were suggested, but when choreographer Lisa de RibÃ¨re suggested the poem, Casey At The Bat, Ms. Wilde was intrigued – a real American ballet based on baseball, “America’s Pastime.”

To create the scenario, de RibÃ¨re used not only the original poem, Casey At The Bat by Ernest Lawrence Thayer, but also one of the many sequel poems that were written in response to the original, which swept the country at the turn of the twentieth century.  The popularity of the Casey poem was due in part to the 10,000 or so dramatic recitations by Broadway theater actor and singer William DeWolf Hopper.  The poem, Casey – Twenty Years Later by S. P. McDonald helped to broaden the story and gave a triumphant victory to the tragic climax of that fateful game in Mudville twenty years before.  In addition de RibÃ¨re added Betsy, Casey’s sweetheart, and also a group of sweethearts for the other ballplayers.  Now Casey and his teammates were not only heroes of the baseball diamond – “men playing a man’s game” –, they were also real people with whom the audience could identify and empathize.

Since the ballet is based on traditional Americana, it seemed appropriate for the music to reflect that, too.  Rousing tunes and marches from American composers John Philip Sousa and Stephen Foster were chosen in addition to some more expressive and lyrical melodies from both composers.  As you watch and listen to the ballet you will recognize Foster’s
“Oh, Susanna!” (in an unusual setting) and the lovely “Beautiful Dreamer.”  The popular Sousa marches, “Stars and Stripes Forever,” “Semper Fidelis,” and “El Capitan” may stir memories of patriotic parades and events.  Composer Michael Moricz skillfully wove these well-known tunes with some less familiar ones.  He also incorporated his own original compositions to create a delightful score that perfectly portrays the emotional highs and lows of the Casey story in addition to the touching moments between two people who stand by each other “through thick and thin.”

“It’s nice to mix the composers’ more unusual compositions with some of their famous ones,” Moricz commented as he was working on the score in the summer of 1990.  “It adds something of a surprise element to the ballet.  My job is to unify the various styles and pieces of music.  Hopefully that will be done with wit and humor,” he continued.  “The material is straightforward, so that gives me a chance to have fun with it, both in instrumentation and in adaptation.”

Not wanting to leave the audience out of the festivities, Moricz and de RibÃ¨re incorporated two essential participatory events at a baseball game:  the singing of our national anthem, The Star-Spangled Banner” and the traditional “Take Me Out to the Ballgame.”

“Although I did not want to belittle the significance or importance of our “national pastime,” says de RibÃ¨re, “it is, after all, a game!  Not only that, Casey is set up as a hero, and heroes never win because eventually they make a mistake, and their whole world disappears.”  Humor is important here, and it comes through in many ways, both obvious and subtle.  The comic movements of the “bat” pas de deux and the antics of the ballplayers as they warm-up and play the game give the ballet a tongue-in-cheek flavor.  “When the idea for Casey came up, what hit me were all the possibilities for interesting and fun movement,” says de RibÃ¨re.  “The movement that players do naturally can easily be incorporated into dance.”  For Pittsburghers this is very clear when we see the Mudville players as they step to the plate.  Watch how one player swings his bat round and round (reminiscent of Pittsburgh Pirate great, Willie Stargell) or how another one wiggles his backside as he gets ready to bat (a la the incomparable Roberto Clemente).

All of these elements plus the striking (or should we say homerun hitting) costumes and scenery that magically transport us from 1908 to 1888 and back again, make for an exciting day at the ballpark (new or old).  So warm up your singing voice and get ready to “Play Ball!”

In 1990, PBT collaborated with Performing Arts for Children to create a new ballet based on the famous baseball poem, “Casey at the Bat.” Told in flashback, the story depicts Casey, who famously struck out in Mudville in 1888, redeeming himself 20 years later.