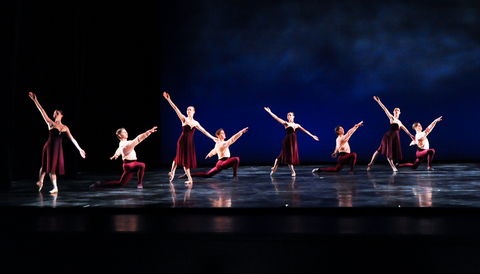 Mark Morris is described as “undeviating in his devotion” to music and is noted for marrying great classical music with innovative ballet technique. The Ghost Trio is one of Beethoven’s best-loved piano trios. Its first and third sections are joyous and playful: the first is sunny and soft; the third is cheery and fast, with difficult passages and harmonic surprises. The two movements, purposely created to sound “normal” and overtly good-spirited, contrast sharply with the slower and more profound middle section. It is the brooding, unearthly quality of the second movement, which Beethoven developed as a sketch for a Macbeth opera, that gives Ghost its name. A haunting, relentless theme recurs throughout this section.

When Maelstrom had its world premiere at San Francisco Ballet in 1994, the San Francisco Bay Guardian called it a “jewel….a (creation) that goes right to the core of classical European dance: the duet between man and woman. This being Morris, however, (he) used the tradition and pulled it into its fragmentary essence.”

Maelstrom is a true ensemble piece, with seven “duets”—couples—forming an interrelated whole. Together the dancers create lines, shapes and poses as they move through space in a continuous ebb and flow with the music. The rhythm of the movement creates voids as well as shapes, resulting in a mosaic of imagery that one critic compared to “ever-forming and dissipating clouds.”  Folk dance motifs (Morris started training as a young dancer in folk dance, flamenco and ballet) and gymnastic movements punctuate the rhythm and imagery.

Though Maelstrom receives Pittsburgh premiere in Uncommon, it is not entirely new to the Company. Principal dancers Christopher Budzinski and Alexandra Kochis performed Maelstromwith Boston Ballet in 2002, along with Pollyana Ribiero, a full-time faculty member with Pittsburgh Ballet Theatre School, and then a principal dancer at Boston Ballet.