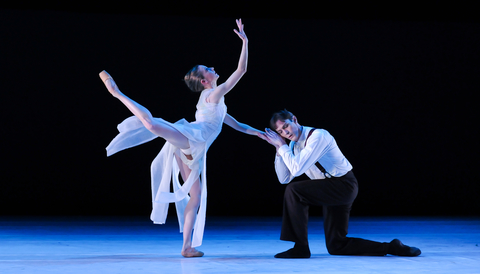 “Ketubah” is a Hebrew term used ina Jewish marriage referring to the contract signed by the bride and groom. The seven movements danced to traditional klezmer music are metaphors for the rituals and traditions of the Jewish wedding:

Houston Ballet commissioned Julia Adam to create Ketubah in 2004. The ballet is based on the rituals of a traditional Jewish wedding, following a couple from first glance to their wedding night. Adam is of eastern European Ashkenazi Jewish heritage and looked to her own family roots when creating the ballet. She dedicated the ballet to her mother, who was a ballet dancer and taught traditional Israeli dance.

Ketubah is a Hebrew term referring to the marriage contract signed by the bride and groom on their wedding day. A work involving 16 dancers—eight women and eight men—the ballet combines ritualized and folk movements that evoke eastern European dance styles with classical and contemporary ballet.

The ballet begins with a light-hearted game of “musical chairs” that replaces the traditional matchmaking process and introduces the bride and groom to each other. Ketubah then flows through the elements of a Jewish wedding: the ritual bath, the groom’s party, the unveiling of the bride, the ceremony under the chuppah (the wedding canopy) and finally ending with a celebration. Adam uses a single design element—a piece of fabric—throughout the ballet to unify and emphasize the underlying theme. It morphs from the mikvah, the bath where the bride immerses herself to cleanse her hands, feet, and body, and becomes her veil. The veil then turns into the chuppah, and the chuppah becomes the sheet that was historically used in the marriage bed. The ballet ends with a festive celebration.

Ketubah is set to klezmer music, a uniquely evocative style integral to vibrant eastern European Jewish culture and frequently played at Jewish weddings and festivities. The music for this performance was recorded by The Best Little Klezmer Band in Texas, an ensemble known for its spirited performances of Jewish folk songs and traditional wedding dances, the haunting, lyrical melodies of east European Jews and fiery virtuosic showpieces.