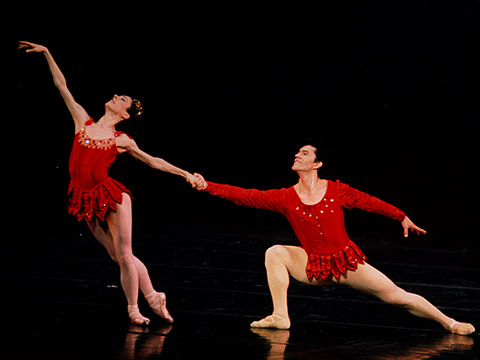 Jewels premiered in April of 1967 at the New York State Theater, and was a box office sensation. Marked as the first three-act plotless work, dance audiences had never seen anything like it.  The precious jewel collection of Van Cleef and Arpels inspired Balanchine to create the work, saying, “I have always liked jewels…I like the color of gems, the beauty of stones.” Although the gems served as inspiration, the ballet is not so much about the gems themselves. The jewel motif, sustained by the costumes and decor, is actually a device to unify sections that would otherwise be disparate. Using three different composers, with music that provides a distinct contrast among the three acts, Balanchine offers us a multi-faceted view of classical dance.  French romanticism, American neoclassicism and Russian classicism are all represented.

Emeralds is the French ballet of the trio. Set to music by Gabriel Fauré, it is fluid and softly passionate, with gracious and graceful dances that are seamless in their flow with the music.  The movements are complex, with convoluted gestures and held by tendrils, in a style that seemed the peak of lyrical romanticism.  It is danced by two leading couples, three soloists, and a corps of ten women.

Igor Stravinsky’s Capriccio for Piano and Orchestra sets the tone for Rubies. The ballet is sexy, sharp and flirtatious. Although some have found Rubies to be representative of America, this was not Balanchine’s intention. It simply reflects the neoclassical style of dance that Balanchine created after his arrival in America. The witty dance is teasing and provocative, demanding bravura performances, particularly from the male, who must execute 100 steps in a 40 second burst, including lifts, side, back and forward revolutions and two turns in the air.

Diamonds, the concluding section of Jewels, represents Balanchine’s salute to the classicism of late 19th-century Imperial Russia. Set to the last four movements of Tchaikovsky’s Symphony No. 3 in D Major, the ballet provides an elegant comment on czarist heritage. This piece is clearly about the ballerina, with her cavalier presenting her as a sparkling gem, revealing all of her facets. Resplendent in diamond-laden tutus and tunics, the company provides a frame for the ballerina and her partner, who lead the rest of the dancers in a dazzling finale that resolves all the threads not only of Diamonds, but of Jewels.