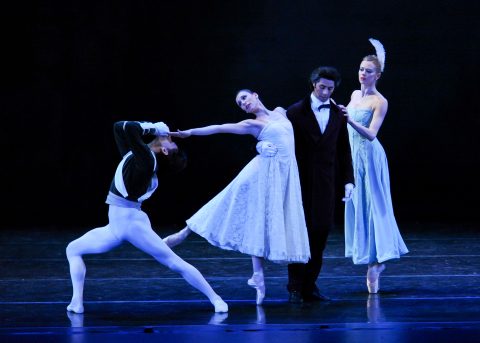 We do (Tudor’s) ballets because we must. Tudor is our conscience. -Mikhail Barishnykov

Antony Tudor’s original program notes for Jardin Aux Lilas are brief: Caroline, on the eve of her marriage to the man she does not love tries to say farewell to her lover at a garden reception. In the end, she goes off on the arm of her betrothed with hopelessness in her eyes.”

The ballet is set in the England’s Edwardian era and is steeped in the conventions of the beginning of the twentieth century. The curtain opens on a pre-wedding party in a moonlit garden, hedged by lilacs. Caroline, the hostess, is about to enter into an arranged marriage to a man she does not love (The Man She Must Marry). Another man (Her Lover), with whom Caroline is deeply in love, is a guest at the party. In their youth they had always assumed that they would marry.

The fourth principal character (An Episode in His Past) is a fashionable, about-town woman and former mistress of Caroline’s fiancé.  She appears unexpectedly upon the scene.

The ballet portrays private feelings submerged in public decorum, though throughout the course of the evening, brief and tempestuous moments of true emotion—of longing and regret—break through the artifice.

Created in 1936, Jardin Aux Lilas is one of Tudor’s most important works. It broke from the convention of using fanciful characters or settings in ballets, presenting instead a situation that could have been drawn from one’s life experience. As repetiteur Donald Mahler notes, the essence of Tudor’s ballets is that the “people and motivations are real—there is an honesty in doing Tudor.”

Rooted in pure, classical dance, Tudor’s choreography has also been characterized as honest, with no extraneous steps or movements. Each movement is critical to the work: each gesture must have intention and the dancer must be able to convey that intention. The result is a ballet is dense with detail and meaning, which may not always be seen on an initial viewing. The first movement of the ballet, for instance, is Caroline’s quiet intake of breath. It’s mirrored in the last, as she exhales.

Mahler also describes movement in the ballet as perfectly mated to the music; in fact Tudor’s intense musicality is a hallmark of all of his works. For Jardin Aux Lilas he chose Ernest Chausson’s Poeme (Op. 25) for violin and orchestra. It has no formal structure but rather has been called “rhapsodic and moody”—perhaps an expression of Chausson’s own tendency toward melancholy and introspection. It was initially rejected by publishers who thought it “bizarre” and too difficult to play, however at its Paris premiere in 1897 the audience felt differently, giving it a long ovation. Today it is a staple of the serious violinist’s repertoire and has been recorded by numerous performers, including Joshua Bell and Itzhak Perlman.

Chausson (1855-1899) was a French Romantic composer who studied under opera composer Jules Massenet. He wrote 39 opus-numbered works, one opera, Le Rois Arthus (King Arthur), one symphony (Symphony in B-flat) and a haunting song cycle, Poeme de l’amour et de la mer.He was acquainted with a number of the great artists of his day, including Claude Monet, Claude Debussy, Auguste Rodin and Edgar Degas. He died tragically young, at the height of his career and talent.

Jardin aux Lilas is steeped in the conventions of the beginning of the twentieth century, when young girls of good families were trained in the good manners of young ladies of refinement, with the right social graces, and an understanding that a girl remains a virgin until she is married.

The setting is a pre-wedding party in a moonlit garden, hedged by lilacs. Caroline, the hostess, is about to be wed to a man she does not love. Another man, a friend of Caroline’s since childhood, makes his appearance unexpectedly. In their youth they had always assumed that they would be married to each other.

Unfortunately, the fortunes of Caroline’s parents have been diminished. No longer having the wealth that was formerly theirs, they have arranged for a betrothal for Caroline with a man of considerable means. He has great ambition, is very successful, and is accustomed to knowing what he wants and always getting it. His marriage to Caroline will open doors to many of the old families of England who wield enormous influence.

The fourth of the group of principals is the fashionable, about-town woman with whom he has conducted a love relationship of long standing. She also appears unexpectedly upon the scene.

Private feelings are submerged in public decorum, although throughout the course of the evening, brief and tempestuous moment sof true emotion break through the artificial surface of custom, as members of the luckless quartet weave a web of risk, frustration, and vain regret in the over-scented garden.