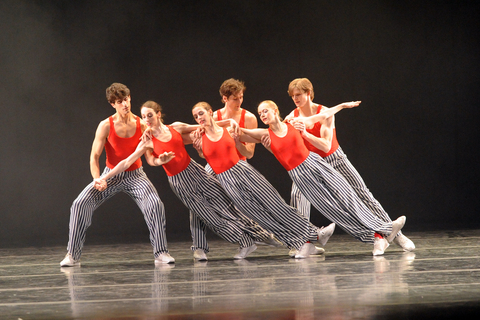 Twyla Tharp thinks of the two women who initiate In the Upper Room in terms of ceramic, Chinese temple guard dogs. From the “cells” of their side-by-side moves, with stretching, kicking and swinging legs, the dramatic, nearly religious and hypnotic, on-rushing work pours forth as one of the most popular of Tharp’s. (Standing ovations have become a consistent part of performance history.)

An inky yet celestially lighted void frames the advancing, receding, exploding and imploding activities of the many-layered work. Beyond her “china dog” markers, the choreographer characterizes the running-shoe-wearing three couples as “stompers” and two pointe-shoe-wearing women as a “bomb squad.” All work according to their nicknames, stomping, and “bombing” the space with their finesse, energy and force.

The cast of “participants” builds gradually and, once established, evolves partly through an altering of costumes and through elaborating their dancing and their connection to the other dancers. Tharp has described her movements here as “fierce, driving, and relentless,” aiming to make some furiously fast unison moves “burn the retina.” The dancers play with and feed on the music’s driving pulse, much of their locomotion can be seen as jogging, sometimes nonchalantly backwards. The “bomb squad” amplifies into the “ballet cadre” and their red costuming stands out with special fire in the black velvet surround.

The music’s unwinding, and unskeining character climaxes in a finale that encapsulates the entire ballet up to that point,with each recapitulation colored and/or twisted this way or that from its original presentation. With the first-time appearance of the entire cast, the piece winds down. In the process, it re-dramatizes the magical void created as a scenic component by Tipton’s innovative lighting plot. The dancers variously disappear into the dense, rich blackness that stands like a shadowy infinity behind the more immediate space showered by shafts of warm light. Two “stomper” men bolt backward into the void by way of throwing forward a sharp punch as they “disappear.” For summary punctuation the “china dogs” cue the ringing down of the curtain by pulling down their fists, as if sharply closing shut a window blind.

Tharp commissioned composer Philip Glass to create a new score. “The music hints at things, but I tried to leave a lot of space for the dance to happen,” says Glass, “in that way the dancers complete it, fill it in.” The choreography fuses a broad spectrum of movement into one vigorous vocabular; boxing, tap dance, yoga, ballet and full-out sprinting are intertwined. The dancers must push through the difficult steps, intricate timing and aerobic demands of the choreography. As the piece progresses, they shed layers of clothing, revealing bright red under-layers and sweaty skin.

In the Upper Room synthesizes choreography, costumes, music and lighting into a transcendent experience for both audience and performers. It has become a central piece in the repertories of dance companies worldwide.