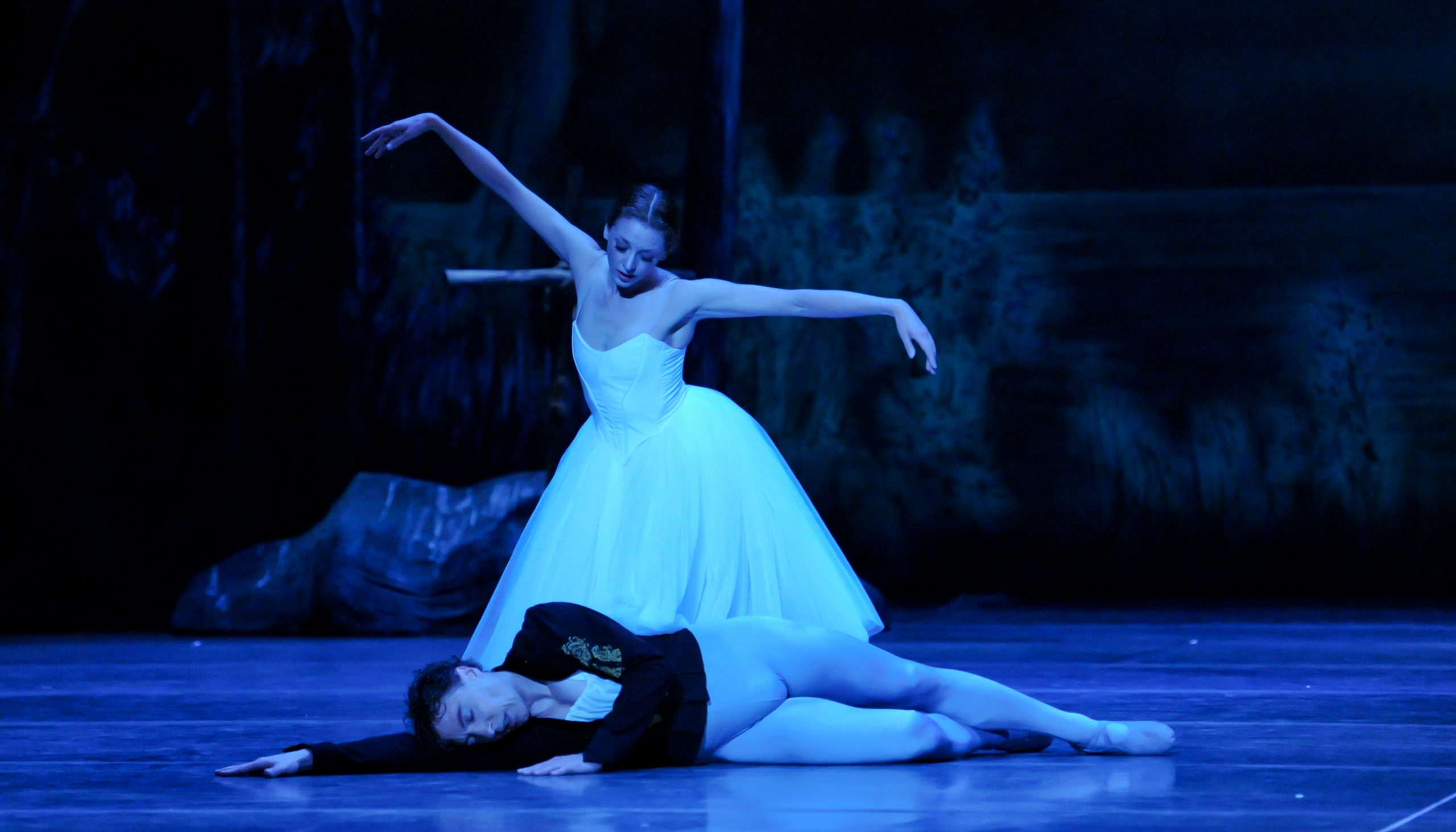 The setting is a vineyard village bordering the Rhine River in Germany. In the early morning Count Albrecht, accompanied by his squire Wilfred, arrives. The Count has been captivated by the beautiful peasant maiden, Giselle, whose love of life and free spirit are expressed by her passion for dancing. Albrecht and Wilfred retreat inside a cottage that neighbors Giselle’s home.

Villagers greet Giselle’s mother, Berthe, as they pass through on their way to gather the last of the grapes before the Harvest Festival. Hilarion, the village huntsman and a gamekeeper to the court, returns from his early morning chores. He is in love with Giselle and leaves a bouquet of flowers at her cottage door.

Count Albrecht emerges from his cottage disguised as a peasant. Wilfred inspects his disguise and expresses some concern. Albrecht dismisses him and Wilfred leaves reluctantly. Albrecht, in his guise, excuses himself from the grape-pickers so that he can be alone with Giselle. He swears eternal love to her, and she performs the traditional daisy test, “he loves me, he loves me not.” Hilarion interrupts, protesting that he, not Albrecht, truly loves Giselle. A quarrel ensues, and Albrecht instinctively reaches for his sword, which as a nobleman he is accustomed to wearing. This behavior strikes Hilarion as odd.

The villagers return, and Giselle invites them to join in dance to celebrate the harvest. Berthe warns Giselle that her life may be endangered if she overexerts herself dancing because she has a frail heart. Berthe is struck by a hallucination of her daughter in death. She sees her as a Wili, a restless spirit who has died with her love unrequited.

A horn sounds in the distance, and Wilfred rushes in to warn Albrecht that the Prince of Courland and his hunting party are about to arrive. Hilarion witnesses this exchange and is puzzled. As Wilfred and Albrecht hastily depart, Hilarion breaks into Albrecht’s cottage. The royal hunting party arrives led by the Prince of Courtland and his daughter, Bathilde. Giselle and Berthe offer them rest and refreshments. Bathilde is taken by Giselle’s charm and beauty. The two confide in one another and learn that they are both engaged to be married. Bathilde presents Giselle with a gold medallion for her dowry. After the royal party leaves to return to the hunt, Hilarion emerges from Albrecht’s cottage with a sword, evidence that Albrecht is actually a nobleman.

The villagers return and proclaim Giselle the Queen of the Harvest Festival and she dances for them in appreciation. Hilarion interrupts the festivities to denounce Albrecht as an impostor. Albrecht tries to deny these charges and threatens Hilarion with the sword. Hilarion blows the hunting horn, a signal for the Prince to return, and the hunting party reenters. Albrecht’s true identity as a count is exposed when Bathilde reveals that he is her fiancé. The devastation of learning of Albrecht’s duplicity is too much for Giselle’s frail constitution. Losing her will to live, she dies of a broken heart.

The scene is set in a clearing in the forest where Giselle’s grave lies. Hilarion places a cross on the grave to mourn Giselle’s death; suddenly, he is frightened by ghostly visions and flees into the forest.

Out of the mist the Wilis are summoned by their Queen, Myrtha, to attend the ceremonies that will initiate Giselle into their sisterhood. The Wilis are spirits of affianced maidens who died as a result of being jilted by untruthful lovers. With their love unrequited, their spirits are forever destined to roam the forest from midnight to dawn, vengefully trapping any male who enters their domain and forcing him to dance to his death. Hilarion reenters the clearing and is trapped by the vengeful Wilis. He is commanded to dance to his death.

Albrecht, who arrives to leave flowers on Giselle’s grave, is also trapped. Myrtha commands him to dance until he dies, but Giselle comes to his rescue. Propelled by her love for Albrecht, she dances for him and with him—sustaining him until dawn, when the Wilis lose their power. Albrecht is saved from death and Giselle returns to her grave. Her pure love and selfless forgiveness free her spirit from the Wilis’ fate, and she rests in peace for eternity.

The inspiration for Giselle, which premiered at the Paris Opera in 1841, came from Théophile Gautier, a prominent Romantic Era writer and critic. He was fascinated by two ghost stories: one was a Slavic legend about Wilis, young maidens who were engaged to be married but who died of grief after being jilted by their fiancés. Their spirits haunted the highways in the dark of night, luring young men and forcing them to dance to their deaths. The other story is Victor Hugo’s Phantoms, a poem about a young woman whose passion for dance leads her to her grave, where even “her ashes . . .  gently move.”

Gautier was thrilled by the possibilities that these ghosts held for ballet. He collaborated with librettist Jules Henri Vernoy de Saint-Georges to quickly write a scenario; they then consulted with renowned choreographer Jules Perrot, who thought it would be a perfect vehicle for the talents of rock star ballerina Carlotta Grisi. Composer Adolphe Adam, working on another project at the Opera, was so taken with the story that he put everything on hold and quickly composed the score for Giselle.

What they created together became one of the supreme achievements of ballet, a work that’s been performed across the world for almost two centuries. Marius Petipa (The Nutcracker, Swan Lake) restaged the ballet at the Imperial Theatre in St. Petersburg in 1903, the version on which most modern productions are based.

Here are just a few of Giselle’s highlights:

Giselle’s stunning character evolution. Giselle goes from a peasant girl who’s hungry for life and love, to a betrayed lover mad with grief, to an underworld spirit. Her transformation requires exquisite technical and dramatic skills—this is one of the ultimate ballerina roles in all of ballet.

The contrast between the first act and the second. The sunny village of Act I is a distant memory as the curtain rises on the dark mysteries of Act II. It’s an extraordinary theatrical depiction of the struggle the characters (and all of us) face between love and betrayal, good and evil, and reconciling the world we know with what lies beyond.

Choreography that marries movement with meaning. The arabesque, for example, is the Wilis’ signature—they dance in a “flattened” arabesque, hopping menacingly across the stage. Giselle enters Wili-hood with a set of lightning turns in arabesque. Her choreography overall, however, is more airborne than the others’—she rises above their fate.

Beautiful ballet-blanc (in which the corps de ballet is dressed all in white with completely unified choreography): One of ballet’s most dramatic conventions is fully realized in Act II. Giselle did it before the swans in Swan Lake and the shades in La Bayadère—and its Wilis are both more frightening and more heartbreaking, dressed in their bridal gowns for wedding days that never came.