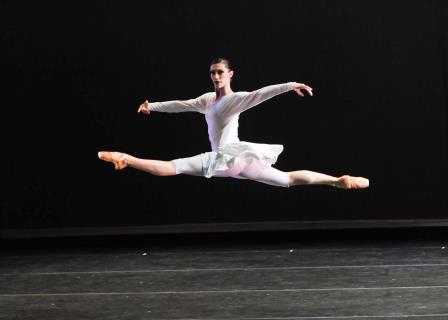 Drink to Me Only With Thine Eyes is set to piano etudes by American composer Virgil Thomson and was choreographed by Mark Morris on American Ballet Theatre (ABT). An excerpt of the ballet was given its first performance at the Dancing for Life Benefit at the New York State Theatre in 1987; the premiere of the full work was at New York City’s Metropolitan Opera House in May 1988. The original cast of twelve dancers included Mikhail Barishnikov, then Artistic Director of ABT.

Repetiteur Megan Williams describes the ballet as finely crafted—simple, sparse and technical. The steps and movements are based in classical ballet vocabulary, but are deconstructed and reinvented. There is a sense of ease and naturalness in the ballet, allowing moments of humor, tenderness and congeniality to emerge among the dancers.

The title of the ballet is taken from Ben Jonson’s 1616 poem To Celia. The poem was set to music sometime after 1770 and the song title became the first line of the poem (rather than Jonson’s original title). It remains a popular traditional English folk song. Thomson utilizes the tune in the piano etude Tenor Lead, which is the last etude in the ballet.

Thomson is one of several composers associated with the development of the “American sound” in classical music—his work has been described as marked by clarity, simplicity and humor, and rooted in American “hymnbook harmony.” Thomson lived in Paris in the 1920s and 30s, where he was part of a highly creative group of American and European artists who had flocked to the city. His circle included Aaron Copland, E.E. Cummings, Orson Wells, Igor Stravinsky and Gertrude Stein, who became his mentor and collaborator. He composed two operas for which she wrote the libretti: Four Saints in Three Acts (famed for its use of an all-black cast) and The Mother of Us All.

When he returned to the U.S. in 1937 he became the chief music critic for The New York Herald Tribune and was commissioned to compose music for several films, including Orson Welles’ Macbeth, and two Resettlement Administration films, The Plow that Broke the Plains and The River. His score for the film Louisiana Story won the Pulitzer Prize for Music in 1949.