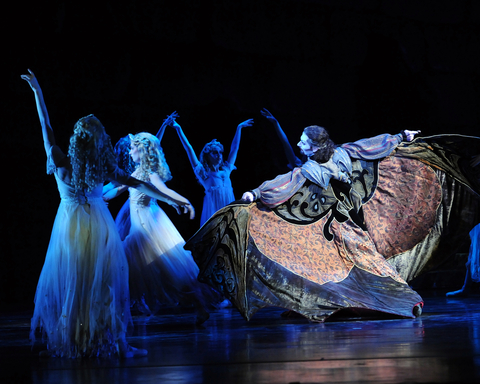 ACT I: The Crypt of Dracula’s Castle

In the evening, Count Dracula and his wives awaken from their coffins in the crypt of his castle.  In order to satisfy the lust of the Count, Renfield, Dracula’s trusted henchman, arrives in a coach with Flora, a lovely young girl from the village.

The innkeeper and his wife are celebrating with the villagers the eighteenth birthday of their daughter Svetlana.  Fredrick, a young , man from the village, is in love with her, and asks the innkeeper for her hand in marriage.  At the height of the festivities, Count Dracula, who has been informed of the beauty of Svetlana, arrives to abduct her.

Flora and the other brides await the return of Count Dracula.  He enters with Svetlana, who is to become his next bride.  At the climax of her initiation, Fredrick, accompanied by the priest and the innkeeper, storms into the Count’s Bedroom in an attempt to save her.