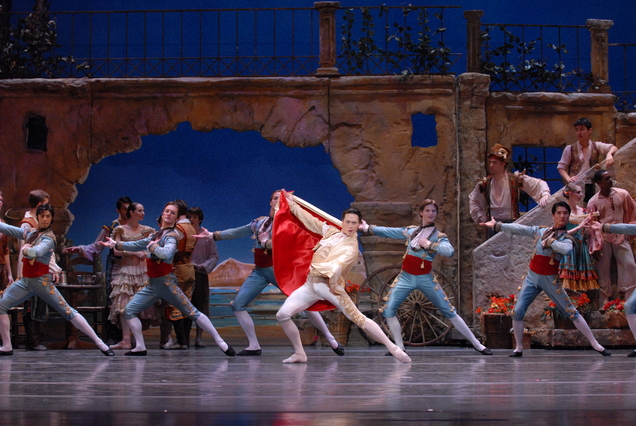 Driven by the vision of Dulcinea the ideal woman, the tarnished (yet inspired) Don Quixote begins his adventure with his trusty squire Sancho Panza, in tow.

Kitri, Lorenzo’s daughter, is in love with Basilio.  Much to her chagrin, she learns of her father’s plan to marry her to Gamache, a foppish nobleman.  Don Quixote and Sancho Panza enter the village, causing great commotion.  Noticing Kitri, Don Quixote wonders if he has, at last, found his Dulcinea.  At the height of merriment, Kitri and Basilio, aided by their friends, Espada and Mercedes, sneak off followed by Don Quixote and Sancho Panza.  Gamache and Lorenzo attempt to pursue the young people.

The fleeing couple is discovered in a friendly gypsy camp by Don Quixote and Sancho Panza.  All are inspired by the romance of the night.  As the vision of Dulcinea appears to him, Don Quixote realizes Kitri is not his ideal, but belongs with Basilio.  Suddenly, the wind gains momentum.  Don Quixote foolishly attacks a windmill, believing it to be a giant threatening Dulcinea’s safety.  Failing miserably, he collapses into a deep sleep.

Don Quixote has an enchanted dream of beautiful maidens in which the image of Kitri symbolizes his Dulcinea.

Lorenzo and Gamache interrupt Don Quixote’s dream.  Sympathetic to the plight of the young lovers, Don Quixote attempts to lead the two astray.

Finally discovered, Kitri is forced by Lorenzo to accept the attentions of Gamache.  The thwarted Basilio commits “suicide”.  Upon learning of the farce, Kitri implores Don Quixote to persuade Lorenzo to wed her to the “corpse”.  Instantly Basilio comes to “life”!  Triumphantly, Kitri leaves to prepare for marriage while Don Quixote and Basilio salute Lorenzo and Gamache for stoically accepting the inevitable.

Act III Scene I – The Wedding

The village celebrates the marriage.  Don Quixote congratulates the couple, bids them warm farewell and resumes his everlasting adventures.

The ballet Don Quixote is based on segments of the classic novel, The Ingenious Gentleman Don Quixote of La Mancha, by Miguel de Cervantes Saavreda,. Published in two parts, in 1605 and 1615, it is a monumental work. It follows the comedic exploits of a nobleman who has read so many stories of heroic knights that he begins to believe he must set out to restore chivalry and honor to the world. A simple farmer, Sancho Panza, is his “squire;” his muse is Dulcinea, in reality a local peasant girl, but in Quixote’s delusion, a vision of perfection and purity. The novel gradually becomes a masterful study of morality, deception, love, sanity and the human condition.

In most productions of the ballet, Don Quixote himself is a character role (a non-dancing role); he is an old man who, though ridiculed and eccentric, carries the thread of the storyline through the ballet. PBT’s production, and all those that come from the Petipa/Gorsky version, center on just one of the vignettes from the novel: the romance and marriage of Quiteria (Kitri in the ballet), an innkeeper’s stubborn and saucy daughter, and Basilio, a penniless barber. The innkeeper’s plans to marry Kitri to the wealthy Gamache are turned upside-down when Don Quixote and Sancho Panza stumble into town and try to help the lovers. The ballet is beloved for its comedic flourishes, its larger-than-life characters and its thrilling technique.

The first ballet based on the novel appeared in 1740, and several more were produced over the next century. Its many incarnations have at one time or another included live horses, real (sheep’s) blood in the duel scene, a huge moon that laughed and cried, and dancers dressed as cacti. The Don Quixote ballet we know today is a glittering amalgam of productions by the “father of classical ballet,” Marius Petipa, and Russian choreographer Alexander Gorsky. Petipa’s versions were created for the Bolshoi Theater in Moscow (1869) and the Imperial Theater in St. Petersburg (1871). His hand is evident throughout the ballet — the dramatic spectacle, the regal posture and attitude, the authentic Spanish flavor (Petipa had danced and choreographed in Spain as a young man), the symmetry and “pure” dance in both classical and character scenes. The role of Kitri is prized by ballerinas for Petipa’s virtuoso choreography, and the ballet’s crowning achievement — the wedding scene’s grand pas de deux in Act III — contains some of the most brilliant dancing in all of classical ballet. It stands alone as a work of great technique and artistry.

Gorsky revised Petipa’s ballet twice at the turn of the 20th century. A young, innovative choreographer, he believed ballet should incorporate greater realism and theatrical technique. He imbued the Don Quixote characters (especially the corps de ballet) with distinctive, playful and realistic individual movements, contrary to Petipa’s vision of the corps as a uniform, symmetrical whole. One scholar suggests that we can thank Gorsky in large part for the ballet’s “dynamic, stormy rhythm and light-hearted gaiety.”

Don Quixote has made its mark on the lives and careers of many dancers and choreographers. In 1924 the legendary ballerina Anna Pavlova, who had danced in one of Gorsky’s productions, was the first to tour the ballet (a shortened version) outside of Russia. Rudolf Nureyev staged the ballet, from memory, for the Vienna Opera in 1966, in one of the early full-length productions in the West. And in 1980, Mikhail Baryshnikov restaged the ballet for American Ballet Theatre, while PBT Artistic Director Terrence S. Orr was ballet master there. George Balanchine created a completely new Don Quixote (1965), in which he appeared as Don Quixote opposite Suzanne Farrell, one of Balanchine’s own muses, as Dulcinea.

Ludwig Minkus composed the score for Petipa’s original ballet and collaborated with him on nearly two dozen others (including La Bayadère). He was known for his ability to quickly invent simple, sparkling melodies that were perfectly suited to ballet. His Don Quixote music carries the dancers and audience into Petipa’s (and Cervantes’) sunlit world.