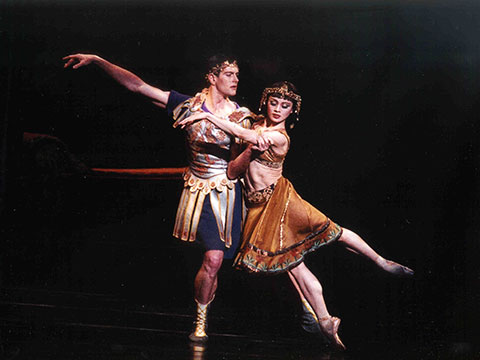 Synopsis (from PBT playbill, 2003; Based on a scenario by D.L. Groover)

Cleopatra’s handmaidens wait for their queen to awaken.  They help her to prepare for the new day. Ptolemy, her jealous brother, and his confidant, Pothinus, spy on the proceedings, plotting to rid Egypt of Cleopatra, leaving Ptolemy as the sole ruler.

Pothinus, alone in the throne room with young King Ptolemy, plans for his young friend to rule Egypt alone.  They order the guards to take Cleopatra and her loyal servant Alcebiades to the desert and leave them to die.

Believing Cleopatra to be the spirit of Isis and to have special powers, the guards release her.

King Ptolemy and Pothinus have taken over the palace, and a decadent party is under way.  Suddenly Caesar arrives, demanding to see Cleopatra.  Ptolemy explains that she has disappeared.  Suddenly, Alcebiades and the guards enter disguised as merchants, bringing a gift for Caesar.  King Ptolemy is put under arrest. The vicious Pothinus hides in the palace, planning to kill Cleopatra so that Ptolemy will be restored as king.

Caesar has fallen under the charms of the queen.  She dances for him, when suddenly Pothinus attempts to assassinate her.  The two most powerful rulers in the world are left alone together.

Scene I:  The Streets of Rome

Caesar and his wife Calpurnia are joined by Marc Antony, Cassius, Brutus, and Octavian.  Together they await Cleopatra’s arrival.

Calpurnia dreams that Caesar is murdered at the senate.  She awakens and begs Caesar not to go to the senate.  He ignores her warnings.

Octavian has conspired with Brutus, Cassius, and the other senators to murder Caesar upon his arrival at the senate.  Calpurnia is horrified to find the bloodstained body of Caesar, and confronts Cleopatra, blaming her for Caesar’s death.  Alcebiades forces Cleopatra to flee to Egypt.  Marc Antony arrives, consoling Calpurnia and vowing to pursue Cleopatra and bring her back to Rome.

Knowing that Antony is in pursuit of her, Cleopatra prepares herself for his arrival on her barge.  Marc Antony enters, and confronts Cleopatra.  Their confrontation turns to passion, and they unexpectedly fall in love.

Receiving the news of the romance between Cleopatra and Marc Antony, Octavian goads the senate into attacking Egypt to bring Antony and Cleopatra to justice.

Cleopatra enjoys an afternoon in the garden with her newfound love.  Suddenly they are warned that ships are burning in the Nile and that Rome is attacking.  Alcebiades escorts Cleopatra to the safety of the palace, while Marc Antony stays behind to assess the seriousness of the attack.  Wounded soldiers enter the garden, informing Marc Antony that the battle is lost. Fearing that Cleopatra has been killed, Marc Antony decides to commit suicide rather than be captured by Octavian.

Cleopatra realizes that the Egyptian forces have been vanquished, and she thinks that Marc Antony is dead.  To avoid being captured by Octavian and his army, she makes the decision to take her own life.  Suddenly Alcebiades arrives, bringing the wounded Mark Antony to her.  He dies at her feet.  Trapped, she takes her own life.