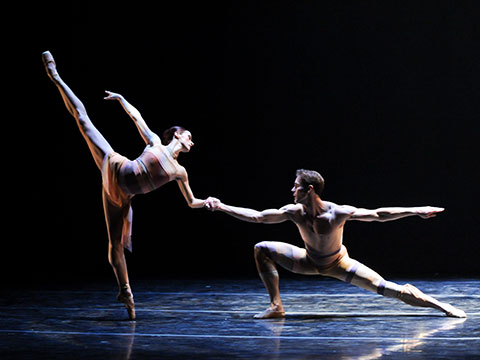 by Lisa Auel, manager of audience education and archives, 2012

Choreographer Dwight Rhoden has created ballets for PBT using a wide range of musical styles and composers—from classical to Doo Wop, from Billy Strayhorn to Paul Simon. When Artistic Director Terrence Orr invited him to be part of the Uncommon project, Rhoden knew he would love the challenge and inspiration of Bach’s music—its energy and depth, its beautiful rhythms. It says dance. He is captivated by the Baroque era, finding that the complex detail and ornamentation in its art and architecture—the “curlicues”—are mirrored its music. And while most Baroque music is more than three centuries old, Rhoden sees and hears freshness and relevance. Even the harpsichord, one of the signature instruments of the period, for Rhoden “all of a sudden today sounds modern.”

One of his goals as he began to shape Chromatic was to create a diverse musical experience, and Rhoden purposely chose pieces that offer a variety of sound and cadence, from solo instrument to lush orchestration. He excerpted sections and movements of larger works, deconstructing the originals and then bringing parts of them together to create a new composition. Rhoden continued to fit the pieces together until quite late in the creative process—in rehearsals, the dancers didn’t know if the section they were working on came first or last or would eventually land somewhere in the middle of the ballet. While this method may have kept everyone guessing (including Rhoden himself) it also kept the work “out on the edge,” which is where he likes it to be. It is from that vantage point of uncertainty that Rhoden, and the dancers, can ultimately “discover” the ballet.

Rhoden describes his choreography in similar terms—on the edge, daring. He places dancers off-center, challenging balance and gravity. His movement style is overtly physical and athletic, with emphasis on a mobile torso and power in the upper body and arms. He uses a lot of steps, making movement sequences dense and complex. His work, he says, is reflective of the busy and intense time in which we live.

For Rhoden, Chromatic mirrors the constant motion of modern life. He sees the ballet as a moving painting, morphing from image to image—the changing picture dependent upon what the music says to him. The effect is abstract, both contemporary and classical: a 21st century-spin on a centuries’-old aesthetic.