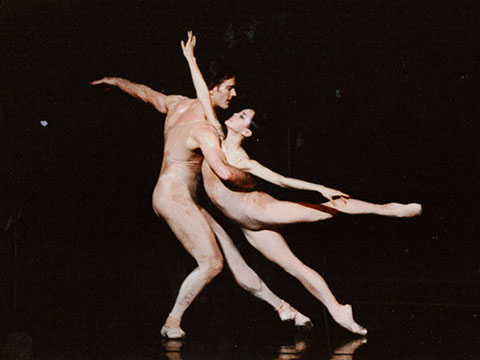 Carl Orff, German composer and music educator, wrote in a musico-dramatic style to fulfill his ambition of creating “total theatre” in which “words, music, and movement were co-coordinated to create an effect of all-round involvement.”  Carmina Burana, his “scenic cantata” was elaborately staged for its premier by the Frankfurt Opera on June 8, 1937.  Carmina Burana has been referred to as the most popular piece of 20th century contemporary music.  It has earned this distinction by its extensive permeation of many of our cultural forms, not only in the concert hall but also in the popular culture.  If you think you are not familiar with this music you may be surprised when you realize that you have heard it in films as contrasting as The Doors, Glory, and Excalibur.  It has shown up on the ice, in the choreography of Nancy Kerrigan and Torvil and Dean as well as in various TV commercials advertising a variety of products.  Then there’s the pop music business where it has made its way, one way or another, into the recordings of Barbra Streisand, Charlotte Church, 98 Degrees and Nas, not to mention its influence on the music for Star Wars: Episode 1 – The Phantom Menace.  Orff probably did not anticipate the extensive use of this music in unconventional settings, yet in a strange way it has achieved his goal of complete involvement of the arts with the other aspects of culture.

In all of Carl Orff’s music, he made a virtue of simplicity and an incessant rhythmic pulse.  Carmina Burana is the culmination of these techniques in his compositions.  He uses a large orchestra, rich in percussion and used with the other instruments, in blocked harmony to underscore the highly accented choral rhythms.  The sum of these techniques serves to generate the effects of wild abandon producing music with a powerful pagan sensuality and direct physical excitement.

The text comes from a collection of poems written by goliards (defrocked monks and minstrels) from early 13th century Europe.  Written in low Latin, low German and French, the manuscript was discovered in 1803 at the Benedictine abbey of Benediktbeuren, a few miles south of Munich; hence Carmina Burana or “Songs of Beuren,” the name bestowed by Johann Andreas Schmeller in 1847 when he produced the edition of this poetry that was used by Orff.

The Fortuna chorus in praise of “the moody goddess of Fortune whose wheel of fate rolls unpredictably over mankind” frames the settings of selected poems extolling the pleasures of the senses “In Springtime, On the Green, In the Tavern, and the Court of Love.”  The irreverent words talk of riotous behavior, gambling, drinking, and love making while being keenly aware of the uncertainties of fate and the frailty of life.

In this spectacular production by Pacific Northwest Ballet Artistic Director Kent Stowell, sets, costumes, chorus, soloists, dancers, and choreography are united in a total theatre experience fulfilling Orff’s visualization.  Set designer Ming Cho Lee’s massive golden wheel of Fortune dominates the stage and the dancers who perform under it as well as under its spell.  The choir, Pittsburgh’s Mendelssohn Choir under the direction of Robert Page, also oversees the unfolding of fate’s dictums on the stage from the loft suspended above the stage.  Clothed in monk’s robes, their voices accent the medieval origins of the text as the melodies evoke emotions of both power and sensuality.  As the choreography of revelers moves from meadow to tavern to the ecstasy of love, Stowell has created groupings and patterns based on the number twelve, reflecting medieval interest in numerology as a key to divine order that subtly affirms the existence of cosmic forces beyond human control.