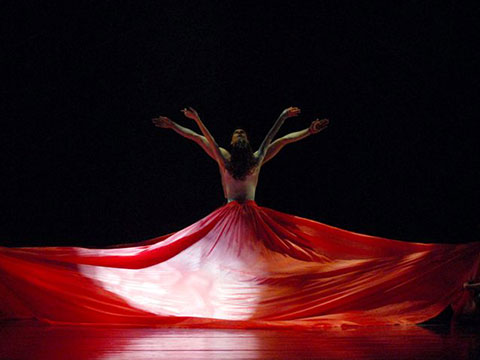 As immense as Carl Orff’s Carmina Burana is, it is matched by Dwight Rhoden’s ballet, in which dancers’ movements are powerful and expansive, and set against a landscape onstage that is equally complex.

Whereas in classical ballet dancers defy gravity without any hint of effort, Mr. Rhoden’s work keeps them firmly grounded.  As they extend their bodies and struggle to find their balance, their physical exertion and power are clearly apparent.

The choreography is natural, organic, with every movement carrying weight.  The real intricacies in fact lie between the grand lifts and jumps, in the transitions; legs don’t just move; they are led by a hip, while arms and hands fold and unbend at every joint.  Partners extend and pull against each other, creating a tension that’s both a hindrance and a counterbalance, keeping both people from careening out of control.

Such opposition matches the reality reflected in both the text and the vacillating dynamics of Orff’s Carmina Burana, and Mr. Rhoden’s work, which is abstract in nature, follows closely both the cantata’s structure and the poems upon which it was based.

The verses, written by wayward monks, celebrate the cycle of life, from the beauty of nature to sensual joys to man’s looming mortality and the cruel tendencies of Fate.  Essentially a moving painting of the poems, the ballet expresses that same cycle – life, love, deaths, intertwined with excessiveness, eroticism, gluttony and debauchery.  With great passion it presents to us the omnipotent wheel of fortune and the frailties of the humans whose fate it determines.

“Life is a cycle, a cycle is a circle, all things return to where they began.”