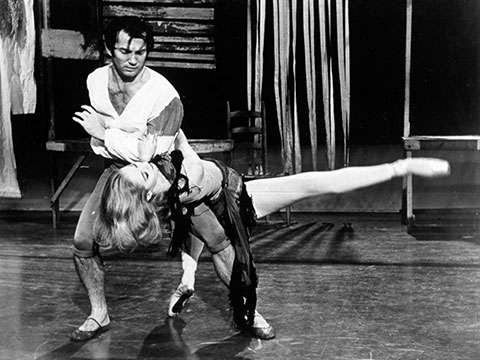 Synopsis (from PBT playbill, 2005; reprinted with the permission of Ballet West)

The story of Carmen can leave you breathless. The passion, the drama, the love, the tragedy combine in such a way that one’s heart feels as though it might stop at any moment from sheer anticipation.

And so our story begins…

We see Carmen and Don Jose on stage, locked in utter turmoil. Don Jose stabs Carmen taking her life. The opera is over.

The stage is struck, the costumes removed, but a spirit still hangs in the air. The characters in the opera spring to life in those that revolved around the show. A crewmember, finished with his duties, dons the jacket of Don Jose. To pass the time, he brings a deck of cards out to amuse himself.

A violinist from the orchestra crosses the stage and bumps into the crewmember, spiling the cards. As the violinist picks up the cards, her fortune is revealed: she sees the destiny of the opera’s Carmen as her own. Despite the struggle to remain the violinist, she is transformed into Carmen.

The story of Carmen unfolds once again, played this time in the lives of the violinist and stagehand.

Micaela, a peasant girl, enters in search of her would-be husband, Don Jose. Girls from the tobacco facotry join the scene. Among them is the gypsy Carmen, who is awaited in great anticipation by the men of Seville. Only one man doesn’t pay attention to her–Don Jose.

A fight erupts between Carmen and Micaela. Carmen is arrested, and Don Jose is posted as her guard. Their tantalizing pas de deux gives Carmen the opportunity to reverse roles with Don Jose and escape. Don Jose is thrown into prison for his failure as guard. While in the dank cell, he dreams of Carmen. While imprisoned, Don Jose duels with his guard, escapes from the cell and becomes an outlaw. He hides in the tavern and learns the art of theft from fellow criminals.

Escamillo, the great bullfighter, enters the tavern. He propositions Carmen, but she replies that she is engaged for the moment. When the company has departed, Don Jose and Carmen dance together, and Don Jose proclaims his love for Carmen.

Micaela searches for Don Jose, while Don Jose is in search of Carmen. Escamillo begins the preparation ritual for his bullfighting. Carmen succumbs to the fate of the cards and dies in the hands of Don Jose.