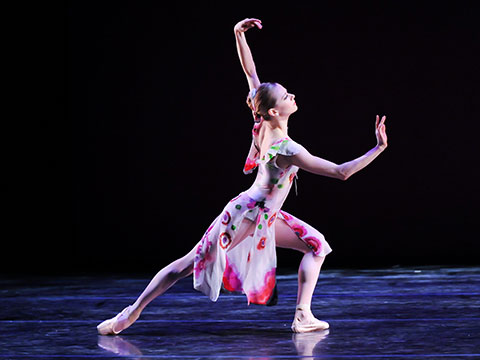 Brahms Quintet was the second ballet Dennis Nahat choreographed for American Ballet Theatre (ABT). Because of the favorable response to his first work, Momentum, Lucia Chase, ABT Artistic Director, asked him to create a new ballet for the 1969-70 Season. She stipulated that he use eight principal dancers and as many soloists as possible. Nahat remembers thinking to himself, “Good God, how lucky can you get?” To be required to create a work for eight premier dancers in one of the world’s premier ballet companies was an honor and a thrill.

It was 1969, the year of the American landing on the moon. Nahat recalls “driving to Atlantic City to perform on a terrible rainy night, when Cynthia Gregory, Terrence Orr, Ian (Ernie) Horvath and I stopped in a bar to watch the landing on TV.” They were mesmerized. “The way (the astronauts) glided on the lunar landscape fascinated me and everyone else,” says Nahat. He felt drawn to capture that profound moment in human history. The luminous image of the astronauts gliding and hovering in space stayed with him as he began choreographing to Brahms’ Double Concerto in A Minor for Violin and Cello. After completing a substantial part of the ballet, however, Nahat realized that he had not followed Chase’s directive—he had only used two of the principal dancers and a few soloists. He knew that to add six more dancers would mean reworking the ballet.

One evening, needing inspiration, he turned on his record player to listen again to the Concerto. To his surprise, the Brahms Quintet in G Major, Opus 111 began to play—he had mistakenly cued up the wrong side of the album. He loved the piece and let it finish; then he “sprang up and repeated the recording,” his legs performing “new and better choreography.” The new ballet began to take shape. Nahat created movements that seemed to emerge from the Quintet itself in an organic, abstract interpretation of the music. He discarded much of the work he had already done, but the unearthly quality of the ballet—inspired by the beautiful, gliding movements of those first steps on the lunar surface—remained.