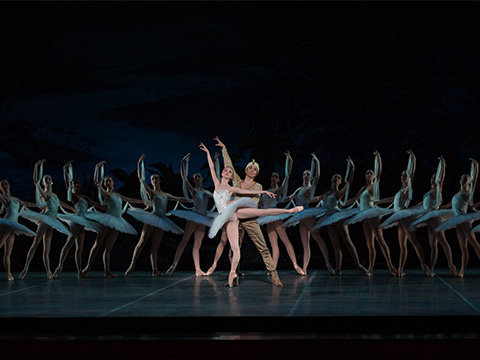 Act I, Scene I: In India, a Sacred Temple in the Forest

Led by the warrior Solor, a group of young men are on a tiger hunt. Breaking away from his friends, Solor persuades the fakir Magedaveya to arrange a secret meeting later that night with the bayadère Nikiya, one of the dancers who serves the temple. The High Brahmin leads a solemn procession from the temple, a sign for the fakirs and bayadères to begin the ritual fire dance. Nikiya, who has been consecrated lead bayadère, performs. Although he is leader of the temple’s priesthood and has taken a vow of celibacy, the High Brahmin confesses to Nikiya that he loves her and promises her wealth and power if she will come away with him. Nikiya is shocked by his declaration and tells him she can never love him, for he is a man of God.

As Nikiya and the other bayadères carry water from a sacred pool to the fakirs, Magedaveya quietly conveys Solor’s message to Nikiya to meet him by the temple walls.

Night falls and the two lovers meet. Solor asks Nikiya to elope with him: she consents and they vow eternal fidelity over the sacred fire. Unknown to the young lovers, the High Brahmin witnesses their oath and seeks to destroy Solor.

Act I, Scene II: In the Radjah’s Palace

The next morning, the Radjah, the head of the principality, calls for his daughter, Gamzatti. This is the day she will meet her fiancé, to whom she was betrothed as a child. He shows her a painting of the handsome warrior Solor, and Gamzatti falls instantly in love. Solor, having been summoned by the Radjah, arrives at the palace. He is captivated by Gamzatti’s beauty, but as he remembers his sacred vow to Nikiya, he is overcome with confusion.

The High Brahmin enters the palace and urgently requests a private audience with the Radjah. Everyone is sent away, but Gamzatti hides and overhears the conversation. The High Brahmin reveals Solor’s love for Nikiya, hoping the Radjah will have Solor killed, but the Radjah orders Nikiya put to death instead. Dismayed, the High Brahmin reminds him that if a servant of the temple is killed the gods will take revenge. The Radjah is unrelenting.

Gamzatti emerges from her hiding place and summons her faithful servant Aya to bring Nikiya to her. When Gamzatti sees her rival’s beauty, she tries to get Nikiya to deny her love for Solor. Gamzatti intimidates her and bribes her with jewels but Nikiya, having sworn her love over the sacred fire, will not give him up. In a moment of desperation, Nikiya seizes a nearby dagger and attacks Gamzatti. Horrified at her own actions, Nikiya flees. Her fate is sealed as a furious Gamzatti resolves to destroy Nikiya.

Act II: The Betrothal of Gamzatti and Solor

Many guests arrive at the Palace Gardens to celebrate the betrothal of Solor and Gamzatti. There are dances of celebration and a blessing of the union. Nikiya has been ordered to dance for the betrothed couple and as she does, she cannot conceal her despair. Solor can only watch with sorrow. As Nikiya tries to leave Aya presents her with a basket of flowers—supposedly a gift from Solor. With hope in her heart that Solor still loves her, Nikiya takes the basket, but as she dances a venomous snake strikes out and bites her. Nikiya soon realizes this is Gamzatti’s revenge. As Nikiya lies near death, the High Brahmin offers an antidote to the venom if she will be his. But even as she sees Solor leave with Gamzatti, Nikiya is faithful to him and chooses to die.

Act III, Scene I: The Temple of the Bronze Idol

The Radjah, Gamzatti, the High Brahmin, and Solor arrive at the temple on the wedding day. At the altar, Solor is distracted and distraught. He feels the presence of Nikiya. As the Bronze Idol dances the ground suddenly begins to rumble, signaling the wrath of the gods over Nikiya’s death. Solor flees the temple.

Solor escapes to his quarters, haunted by the vision of Nikiya and tormented by grief. Magedeveya consoles him and encourages him to rest. Solor sinks into a world of dreams and memory.

Act III, Scene III: The Kingdom of the Shades

Solor finds himself in the Kingdom of the Shades, ghosts of bayadères. They appear out of the shadows, descending in a long procession from the mountain cliffs. Among them he sees Nikiya. There is no more reality for Solor, and as she beckons, he follows the shadow of his fair Nikiya.