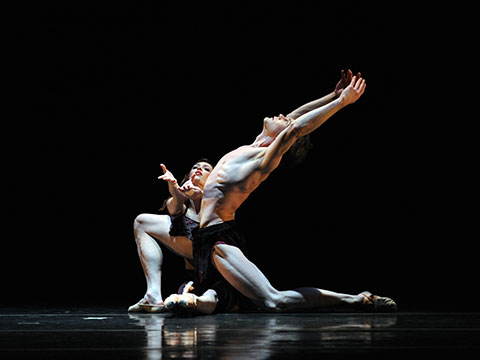 When Dwight Rhoden first heard Caccini’s Ave Maria he was in the middle of choreographing his 1995 ballet The Grapes of Wrath. He was “blown away” by the music’s mesmerizing and sacred quality and felt compelled to include it in the ballet. Along with two dancers he created this pas de deux in just two or three rehearsals. It has become a signature piece for the choreographer and is regularly performed as a stand-alone work.

Ave Maria’s choreography is innovative and athletic, characterized by deceptively difficult lifts, jumps, slides and falls. The dancers must be intensely musical and fully in sync—the ballet constantly shapes and reshapes sculptural moments that require them to “fill out” every nuance of the music. Its imagery is personal for Rhoden—a way of processing and referencing the religious traditions he grew up with. But it also evokes a more universal spirituality, connecting physicality, music and self-reflection in a modern masterpiece.