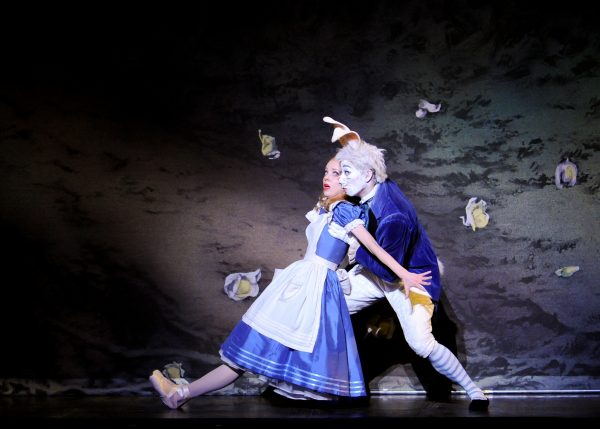 Alice is playing beside a river while her sister reads a book.  She tries to get her sister’s attention, but eventually gives up and falls asleep in her sister’s lap.  Suddenly, out of nowhere, a White Rabbit appears.  Alice follows him as he jumps down a rabbit hole.

Alice lands at the bottom of the hole in a long low corridor made entirely of doors.  She finds a small table with nothing on it except a tiny gold key and a bottle.  Alice discovers that the key will only work in the smallest door in the corridor, which opens into the most beautiful garden Alice has ever seen.  Alice drinks the contents of the bottle and starts to shrink.  Underneath the table she finds a small cake.  She eats the cake and it has the opposite effect to the bottle – she starts to grow and grow.

The White Rabbit drops his white glove and his fan.  Alice picks them up and starts dancing with them.  Realizing she is lost and alone she suddenly feels very lonely; she starts crying so much that she is soon swimming in a pool of her own tears.  As she tries to swim to safety she realizes that she is surrounded by animals who all swim through the pool of tears to the bank.  They all sit shimmering on the bank and Alice decides to hold a Caucus Race in order to dry the animals’ ruffled fur and feathers.

The White Rabbit returns in search of his glove and fan.  He and Alice meet an enormous Caterpillar sitting on top of a huge mushroom smoking a large pipe.  The Caterpillar conjures up the Garden of Living flowers and the flowers dance for Alice.

The Frog Footman and the Fish Footman appear with an invitation to the Queen’s Croquet Match.  In the Duchess’s house, the Duchess and the cook are hard at work in their kitchen.  Watched by the Cheshire Cat, the Cook prepares fish with clouds of pepper while the Duchess and Cook pass the baby from one to the other, and finally to Alice – she looks at the baby and it turns out to be a pig!  The Cook and Duchess rush off leaving Alice with the Cheshire Cat.  The White Rabbit reappears and whisks Alice off to the Mad Hatter’s Tea Party where she meets the March Hare and the Dormouse.

Alice is taken to the Queen’s Croquet Match by the White Rabbit and meets the Royal Gardeners who are painting the roses red.  The Queen of Hearts arrives with the entire pack of cards including the Knave of Hearts.  The croquet match begins and out of nowhere the Cheshire Cat reappears to watch the game.

The Duchess returns and tells Alice all about the Queen, but the Queen notices them gossiping. She looks at the Duchess and cries “Off with her head!”  The cards, the Queen, the Duchess and the Cheshire Cat all disappear, leaving Alice with the Gryphon.  Down by the seashore, Alice and the Gryphon meet the Mock Turtle.  Four lobsters appear from the sea and dance the Lobster Quadrille.

Alice is exhausted by all the excitement and she falls asleep.  In her dream the Knave of hearts appears and they dance together.

The White Rabbit returns in a great panic and takes Alice to The Trial.  The Knave of Hearts has been accused of stealing some tarts!  The White Rabbit reads out the accusation and calls the Mad Hatter as the first witness.  The Cook is called as the second witness. The court descends into chaos as the Queen of Hearts cries “Off with his head!  Off with her head!”

Alice suddenly remembers that most of the characters in the courtroom are just cards.  She is no longer frightened of them and she finds herself back on the river bank with her sister.  All the fantastic characters have disappeared and Alice is left wondering whether it was all just a dream…