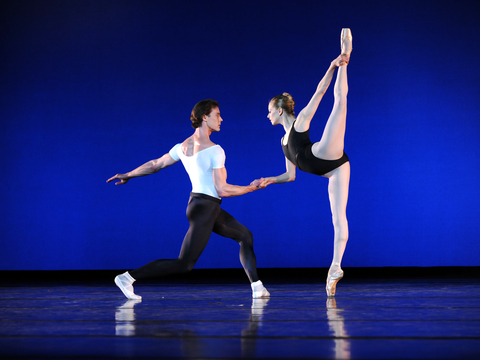 By Lisa Auel, Manager of Audience Education and Archives

Former New York City Ballet dancer Elyse Borne staged both Agon and Prodigal Son for Pittsburgh Ballet Theatre. Ms. Borne is a member of a small group of repetiteurs who worked under George Balanchine and who routinely set his ballets. She calls preparing to stage one of Balanchine’s works an “enormous study event.” Viewing as many film and video versions of the ballet as she can find, she painstakingly compares each step to reach a better understanding of what Balanchine originally intended. Ms. Borne notes that Agon and Prodigal Son are two of the most difficult of Balanchine’s ballets to stage and to dance.

Agon, Greek for “contest,” was a joint effort between Balanchine and composer Igor Stravinsky. The third of a trio of “Greek” works by the pair, which included Apollo (1928) and Orpheus, (1948), the ballet contains pieces modeled after 17th century French court dances. Balanchine and Stravinsky designed the structure of the concurrently with the creation of the music. Its premiere in 1957 has been hailed as a seminal event in dance: the central pas de deux, featuring Arthur Mitchell and Diana Adams, is considered one of the defining moments in 20th century ballet.

Like much of Balanchine’s work, Agon is plotless, with no scenery or decor and only simple black and white costumes. The movements, danced in pas de deux, trios and larger groups (including all twelve dancers), combine formality and intimacy, precision and fragmentation. An individual dancer’s pattern is discreet, but threads through and has bearing upon the pattern of the larger group. For Ms. Borne, the choreography is a “test of a dancer’s brain,” and the way Balanchine placed the steps into the score is a glorious, if extreme, musical challenge. New York Herald Tribune dance critic Walter Terry saw Agon as a celebration of the “movement miracles of which the dancer’s body is capable.”