In celebration of our golden milestone, a long-standing supporter has generously offered a $3 million gift to double every donation made to live music over the next three years. When this community match challenge is met, PBT can ensure live music at over 500 individual performances for the next 50 years. Help Pittsburgh Ballet Theatre bring the full power of the PBT Orchestra to even more season productions. 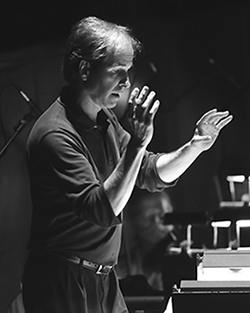 Charles Barker is principal conductor of American Ballet Theatre, a position he has held for over 25 years. He was music director of the Australian Ballet from 1997-2001 and then joined the Royal Ballet in London for two seasons. He regularly guest conducts for the San Francisco Ballet and Houston Ballet. As music director of the American Chamber Orchestra from 1981-87, he made his Carnegie Hall debut in February 1983. He was a member of the Barnard-Columbia Ancient Drama Group, which presents Greek drama in the original language and wrote music for productions of The Bacchae, Hippolytus and Heracles. He lives in New York with his wife Miranda Coney, former principal dancer of the Australian Ballet, and their two boys.