Pittsburgh Ballet Theatre performs at the Benedum Center and the August Wilson Center for African American Culture in addition to touring venues.

The Benedum Center is one of downtown Pittsburgh’s grand downtown theaters. The August Wilson Center is a new performance, exhibit and community center in the heart of Pittsburgh’s cultural district.

The Benedum Center for the Performing Arts

Arrive at the theater early to take in the unique features that make the Benedum a jewel in the crown of Pittsburgh’s cultural district. 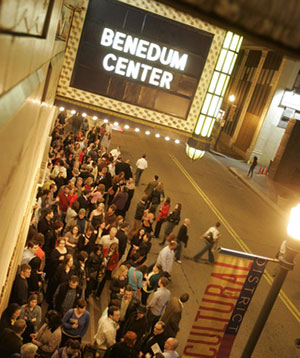 When you arrive at the theater. note the marquees on the front and Penn Avenue sides of the theater. They were designed in 1928 to showcase the “new” electric lights.  By the terms of the Historic Landmark agreement there is only limited reference to the new name of the theater: The Benedum Center for the Performing Arts. You will also see references to the original name, The Stanley Theater. 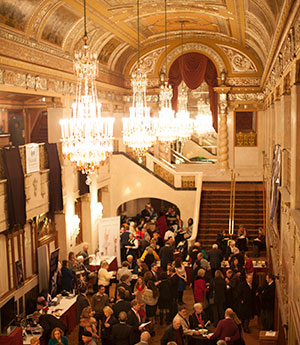 All but one of the original murals on the ceiling of the Grand Lobby were destroyed over the years. Celeste Parendo, the painter who re-created them, worked from photographs of the designs and from one well-preserved mural for the colors.  Much of her work was done with Q-tips. She tried to lie on her back and paint as Michelangelo did when he painted the Sistine Chapel; however, in that position her hand went numb due to lack of circulation. She quickly found ways to kneel or stand on the scaffolding in order to finish her painting. 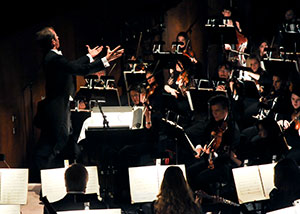 The pit is where the orchestra sits to play the music for ballet or other performances. It is divided into two sections, each of which can be raised or lowered by a built-in hydraulic lift. With a smaller orchestra, half of the pit is raised and additional seating is installed. If an orchestra is not required, the entire pit is raised for seating. 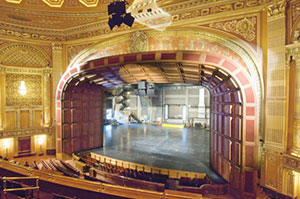 The opening around the stage is the proscenium.  In accordance with the guidelines of the Historic Landmark restoration, the original elaborately painted plaster arch has been restored. (You can see the top of the arch from the balcony.)  An exception to the restoration guidelines was made for the wooden acoustical arch. The panels in the arch can be adjusted to change the acoustics of the theater or they can be opened to accommodate vocalists, actors or musicians. 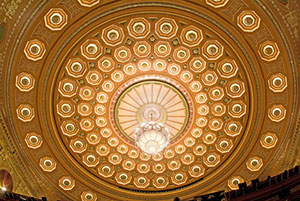 Believe it or not, this beautiful centerpiece to the theater’s elaborate dome weighs 2 tons and contains over 50,000 pieces of crystal.  When it is cleaned the chandelier is lowered to a certain point and then scaffolding is built around it.  Each crystal is washed in soapy water and replaced. The chandelier is cleaned about once a year: it takes a crew of twelve people two full working days. 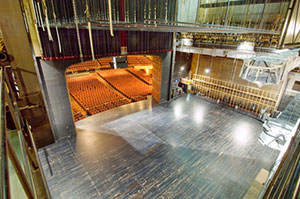 This is the third largest stage in the country. (The largest is the Metropolitan Opera in New York City and second is the Indiana University School of Music in Bloomington.) The full stage measures 144 feet wide by 78 feet deep. The performance space that you will see is 56 feet by 56 feet. The wooden floor is covered with marley, a black rubber-like, non-skid surface that is made for dancing.

Photos courtesy of the Benedum Center for the Performing Arts and the Pittsburgh Cultural Trust.