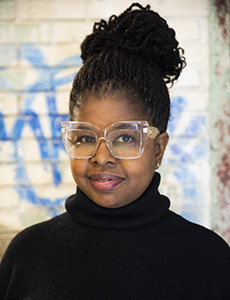 Staycee R. Pearl received her initial dance training at the Alvin Ailey American Dance Center. Once relocated to Pittsburgh, she began her six-year tenure as Artistic Director of Xpressions Contemporary Dance Company, premiering numerous works and performing choreography by celebrated national artists such as, Rennie Harris, Robert Battle, and Kyle Abraham.  She is responsible for the choreography in Nathan Davis’ jazz-opera, Just Above My Head, Carmen Jones, and Lost in the Stars, produced by the Opera Theater of Pittsburgh. Ms. Pearl graduated from the University of Pittsburgh, with honors in Studio Arts/Africana Studies. She continues to produce multi-media work with husband, Herman ‘Soy Sos’ Pearl, and debuted STAYCEE PEARL dance project at the Kelly-Strayhorn Theater in 2010, which served as resident dance company for the theater until Spring 2013. Staycee’s visual arts exhibitions include STACKS, inspired by Romare Bearden, and Fe Gallery’s My Mythos. Ms. Pearl was honored with an August Wilson Center Artistic Fellowship 2011/2012, presenting OCTAVIA, a movement/multi-media installation based on the life and writings of famed Science Fiction writer, Octavia Butler. Staycee and, Herman Pearl proudly opened their dance/art/sound space, PearlArts Studios, in April of 2012. In February of 2013, SPdp unveiled the evening-length piece, “…on being…”, an investigation of race, gender, and personal identity in relation to conversations around Post-Blackness. …on being… remained on Creative Capital’s national listing, ON OUR RADAR for a year after it premiered. Her work as a choreographer has been supported by the Heinz Endowments and the Pittsburgh Foundation since 2001. She is humbled to have been nominated for the Carol R. Brown award three years in a row for dance and multidisciplinary arts. Via PearlArts Studios, Staycee and Herman creating meaningful opportunities for pre and professional artists through movement and art
residencies, classes and workshops.

Artist in residence, Staycee Pearl, is sponsored by