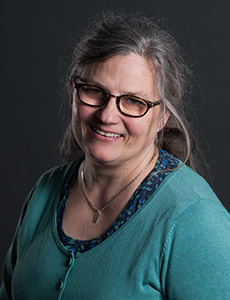 Ellen Gozion received her BA in Music from UNC-G and has been an accompanist for dance since 1991. In addition to her work with PBT, she has played for numerous modern and classical directors and choreographers throughout the region, as well as for American and English folk dance. She currently serves as Pianist and Director of Music at St. Andrew Lutheran Church, Shadyside (RIC) where she leads a very small choir and even smaller old-time ensemble.

Ellen is a well-regarded singer and recording artist of traditional American and British folk songs. In 2013 she was an American Music Abroad finalist with the State Department, performing alongside Chatham Baroque and old-time fiddler Mark Tamsula.  In 2014 Ellen was an Arts, Crafts and Folklore faculty member at the Augusta Heritage Festival in West Virginia.

She is a member of the local band The Early Mays whose “Appalachian-inspired folk songs are built on masterful ballad singing and a sweet old-time sound.” Ellen enjoys poetry and literature, soap-making and tending her funky urban garden.