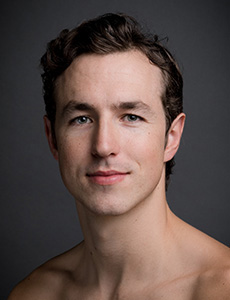 William Moore joined Pittsburgh Ballet Theatre in 2013 and was promoted to soloist in 2018. He was born in Ipswich, England and received his training at the Angela Rose school of dance. He then joined the Royal ballet school from 2002-2009, where he performed and toured with The Royal Ballet company in many productions. He also worked and performed with Northern Ballet and English National Ballet. After graduating, William joined Estonian National Ballet from 2009-2012. William’s repertoire at PBT includes Birbanto in Le Corsaire; Riff in West Side Story Suite; the Beast in Beauty and the Beast; Tom in The Great Gatsby; Knave of Hearts in Alice in Wonderland; Hook in Peter Pan; William Forsythe’s In the Middle, Somewhat Elevated; Jiří Kylián’s Petit Mort and Sinfonietta; Twyla Tharp’s In the Upper Room and Nine Sinatra Songs; Jerome Robbins’ Fancy Free; lead couple in George Balanchine’s Rubies; Peasant Pas de Deuz in Giselle; Pas de Trois in Swan Lake; and Cavalier, Nephew and Drosselmyer in The Nutcracker, among many others. William has been commissioned by PBT to choreograph several ballets: Four Marks, response and Weighted Affair. William has also choreographed for PBT school and in 2019 won the most Outstanding Choreographer award at YAGP.