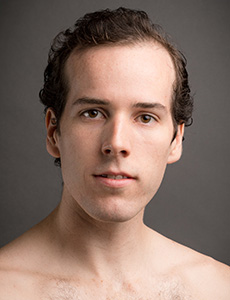 Cooper Verona is originally from Connecticut and joined PBT in 2011. He received his training from David Lawrence and Wendy Fish-Lawrence at Connecticut Concert Ballet, Ethan Stiefel at the University of North Carolina School of the Arts, and Claudio Muñoz and Andrew Murphy at Houston Ballet’s Ben Stevenson Academy. He has been featured as Tybalt in Derek Deane’s Romeo and Juliet; the title role in Ben Stevenson’s Dracula; Jay Gatsby in Jorden Morris’ The Great Gatsby; Bernardo in Jerome Robbins’ West Side Story Suite; the Mad Hatter in Derek Deane’s Alice in Wonderland; the Man She Must Marry in Anthony Tudor’s Jardin Aux Lilas; and Cavalier, Snow King, Arabian and Drosselmeyer in Terrence S. Orr’s The Nutcracker. He has also been featured in William Forsythe’s In the Middle, Somewhat Elevated; Jerome Robbins’ In the Night and The Concert; Dwight Rhoden’s Ave Maria; and Julia Adam’s Ketubah. Other memorable performances include Twyla Tharp’s In the Upper Room and Nine Sinatra Songs; Jiří Kylián’s Petite Mort, Sechs Tänze and Sinfonietta; James Kudelka’s The Man in Black; and Mark Morris’ Maelstrom, Drink To Me Only With Thine Eyes and Sandpaper Ballet.

Verona also has a passion for choreography. He has been commissioned by PBT to create brood, Walking With, Gravitational Embrace and Thick White Sheets. He has also created works for PBT School and Point Park University, as well as the PearlArts Festival in Pittsburgh.  Verona is also a dancer and choreographer with Chamber Dance Project in Washington, D.C.