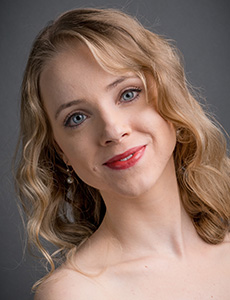 Amanda Cochrane joined Pittsburgh Ballet Theatre in 2009 and was named one of Dance Magazine’s 25 to Watch in 2013. She advanced to soloist in 2012 and to principal in 2014. She has loved to dance since childhood and began her early training in her hometown of Spokane, Washington, at Sandra Olgard’s Studio of Dance and Ballet Arts Academy. In 2007, she continued her training with the PBT School Graduate Program in Pittsburgh. Some of her favorite roles include the title role of Terrence S. Orr’s Giselle, Nikiya in Orr’s La Bayadère, Ballerina in Jerome Robbins’ The Concert, Aurora in The Sleeping Beauty, Kitri in Don Quixote, Odette/Odile in Swan Lake, Caroline in Antony Tudor’s Jardin Aux Lilas, Russian Girl in George Balanchine’s Serenade, Cinderella in Septime Webre’s Cinderella, Juliet in Derek Deane’s Romeo and Juliet, Marie and the Sugar Plum Fairy in Orr’s The Nutcracker, Tinkerbell in Jorden Morris’ Peter Pan and Svetlana in Ben Stevenson’s Dracula. She’s also performed featured roles in Jiří Kylián’s Petite Mort and Sechs Tänze; Jerome Robbins’ In the Night; George Balanchine’s Rubies; and Twyla Tharp’s In the Upper Room and Nine Sinatra Songs. Cochrane began choreographing in 2017 and looks forward to seeing where this venture leads her.