The Great Gatsby is one of the most well-known, distinguished American novels. Published in 1925, F. Scott Fitzgerald’s story chronicles a sweltering New York summer through the eyes of Nick Carraway. Nick relates the story of how he was absorbed into the social strata of the wealthy in the roaring 1920s under the wing of Jay Gatsby, his mysterious, extravagant neighbor. Gatsby holds lavish parties to win back the love of his youth. His love and obsession, the married Daisy Buchanan, is the final bridge to build for Gatsby to live the American Dream.

The Great Gatsby is, at its core, a story about reinvention through capitalism, the American Dream and unrequited love. Fitzgerald hides this all under the guise of a decadent tale of love and betrayal. With a story so timeless and characters so mystifying, it’s no wonder the novel has inspired readers for decades.

The delicacies of the story remain an integral part of American popular culture. And nothing shows that more than the various incarnations of the novel since its publication. Gatsby has made his way to the big and small screens, including the 1974 film directed by Jack Clayton starring Robert Redford, Mia Farrow, and Sam Waterston, and the 2013 Baz Luhrmann adaptation starring Leonardo DiCaprio, Carey Mulligan and Tobey Maguire. Both films brought to life the tension and the righteousness of the 1920s with exquisite visuals and biting energy. A 2000 TV movie also captured the spirit of the novel, with music composition by Emmy nominee Carl Davis, who created the original score for PBT’s newest balletic rendition of the novel.

The Great Gatsby has been incarnated as a ballet for decades. Pittsburgh Ballet Theatre has performed interpretations of F. Scott Fitzgerald’s novel since the late 1980s, beginning with Andre Prokovsky’s choreography in 1987. This production of The Great Gatsby marked PBT’s first performance in the newly-renovated Benedum Center. 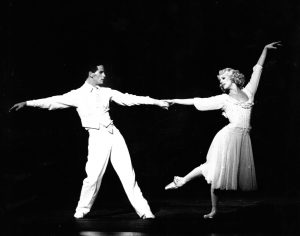 Bruce Wells choreographed a version performed by PBT in 1996, and in 2008, the production was given a reinvigorated style with a new rendition featuring choreography by Lauri Stallings and John McFall. In total, PBT as performed The Great Gatsby four times. Nearly 10 years since the last time audiences accepted their invitation to Gatsby’s soiree, PBT is partnering with Jorden Morris and Carl Davis for a sweeping, cinematic adaptation and a world premiere at the Benedum Center.

Jorden Morris’ fascinating interpretation of The Great Gatsby offers an opportunity to reflect on the ways Gatsby’s story has been told through ballet at PBT and through other companies around the world. The Northern Ballet, California Ballet, Washington Ballet and Hong Kong Ballet have each told the story of Gatsby’s rise and fall, each with a different life and energy unique to the understanding of Fitzgerald’s text.

Jorden Morris’ production of The Great Gatsby comes at a fascinating time. It was 10 years ago that we brought The Great Gatsby back into the limelight, complete with ‘20s flair, flapper dresses and boisterous music. With this latest iteration, the production takes on a completely new verve with lively dance, jazzy tunes and cinematic set pieces. We’re escaping to a time of glamour that veils a desire to live as mysteriously as Gatsby himself. Join us!

See PBT’s brand new production of The Great Gatsby on stage with the PBT Orchestra Feb. 8-17, at the Benedum Center. Get your tickets here.