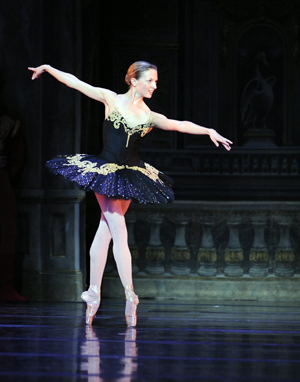 One of the most striking sequences for the Swan Queen is her series of 32 fouettes in Act III of Swan Lake. To do a fouette (meaning “to whip” in French), a ballerina whips one leg in a circular motion to the side and then into a passe while turning and rising on and off of pointe on the standing leg.

Italian ballerina Pierina Legnani first performed 32 consecutive fouettes in a performance of Cinderella in 1893. When she originated the role of the Swan Queen in Marius Petipa and Lev Ivanov’s version of Swan Lake in 1895, Petipa added in the 32 fouettes specifically for her. Performed by the Black Swan, Odile, the spellbinding turn sequence effectively demonstrates the power and drama of the dark side of the Odette/Odile dual role. Legnani’s legendary performance of the fouette sequence as the Swan Queen set the standard for ballerinas to come.

Performing 32 fouettes in a row represents the incredible skill, technique, and control of a prima ballerina. The step requires strength and stamina that can only be gained through years of dedicated ballet training. Even more than a century after Legnani’s balletic feat, the Swan Queen’s 32 fouettes continue to captivate audiences in productions of Swan Lake worldwide.