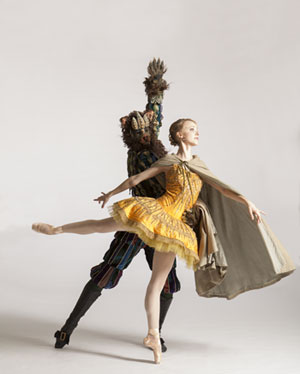 Pittsburgh Ballet Theatre is proud to announce that it has received a $100,000 grant from The Pittsburgh Foundation to fund the acquisition and Pittsburgh premiere of a new full-length ballet: Lew Christensen’s “Beauty and the Beast.”

As part of its 45th Anniversary Season, Pittsburgh Ballet Theatre will debut its new production of “Beauty and the Beast” Feb. 5-16, at the Benedum Center for two performance weekends, including Valentine’s Day weekend. Funding for the project was provided by the A.D. and J.W. Wilson Fund and the Jean Hartley Davis and Nancy Lane Davis Fund #3 of The Pittsburgh Foundation, which made it possible for PBT to acquire the production, including full sets and costuming, from San Francisco Ballet. The company will be revitalizing the set pieces and costumes and re-staging the production under the direction of PBT Artistic Director Terrence S. Orr. In addition to the grant, support from presenting sponsor PNC Bank will allow PBT to stage this ballet not only for the 45th Anniversary, but also for future ballet seasons.

Set to a Tchaikovsky score, Lew Christensen’s “Beauty and the Beast” is an imaginative interpretation of the triumph of inner beauty. This timeless tale traces its roots to the ancient Greek myth, “Cupid and Psyche,” but is best known through the 1756 version by French governess Jeanne-Marie Leprince de Beaumont. Against the striking backdrop of the austere castle, impenetrable enchanted forest and magnificent ballroom, Christensen’s expressive choreography convincingly portrays the transformative power of love. Featuring fanciful characters and lavish costumes, PBT’s “Beauty and the Beast” presents this classic story with powerful imagination and production value.

Lew Christensen’s “Beauty and the Beast” received its world premiere in 1958 at San Francisco Ballet, where it experienced consistent box office success and critical acclaim during its long-time run. The ballet’s creator, Lew Christensen, was an influential figure in American ballet, gaining fame as a performer and teacher under George Balanchine in the 1930s. Throughout his more than 50-year dance career, Christensen earned a reputation as a prominent American ballet performer, choreographer and director, including his long-term tenure as director and choreographer for San Francisco Ballet. During their own dancing careers with San Francisco Ballet, four members of PBT’s current artistic team – Artistic Director Terrence S. Orr; Robert Vickrey, assistant to the artistic director; PBT School Director Dennis Marshall; and PBT School Faculty Member Andre Reyes – performed in the production.

Season subscription packages for Pittsburgh Ballet Theatre’s 45th Anniversary Season – including “Beauty and The Beast” – are available now by visiting www.pbt.org or calling 412-454-9107. Single tickets sales open Aug. 25, online at www.pbt.org or by phone at 412-456-6666.