Pittsburgh Ballet Theatre opens Derek Deane’s zany Alice in Wonderland this weekend at the Benedum Center. Few things are impossible in this off-kilter world. Beginning with a surreal dive down the rabbit hole, illusion floods the stage with curiosities – a smorgasbord of doors, tutus made of playing cards, color-changing roses and size-shifting scenery. Seen through Deane’s creative lens on classical technique, the dancing complements the whimsy and wit of Lewis Carroll’s timeless story. Here are five things that will make you curiouser and curiouser about this blockbuster production: 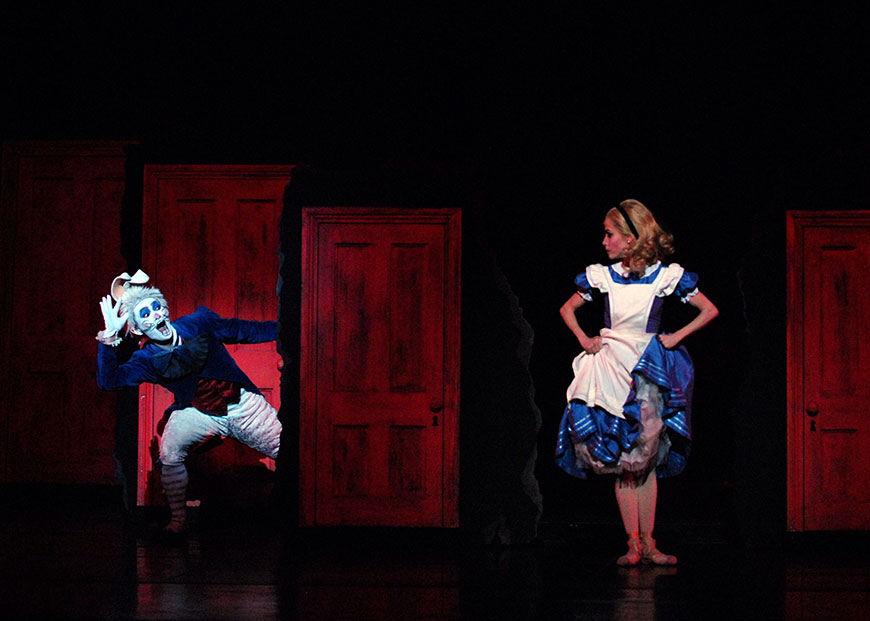 Alice in Wonderland takes production value over the top. The scenic design does justice to the surrealist world Lewis Carroll and illustrator John Tenniel created for the page, morphing from scene to scene through an elaborate series of painted drop curtains and 3D set pieces, including a puzzling assortment of doors, the Caterpillar’s toadstool and the Duchess’ house. Illusions add to the wonder – like a size-changing Alice, roses that change color as they’re painted and the rabbit hole’s dizzying succession of floating teacups, clocks and over-sized objects. 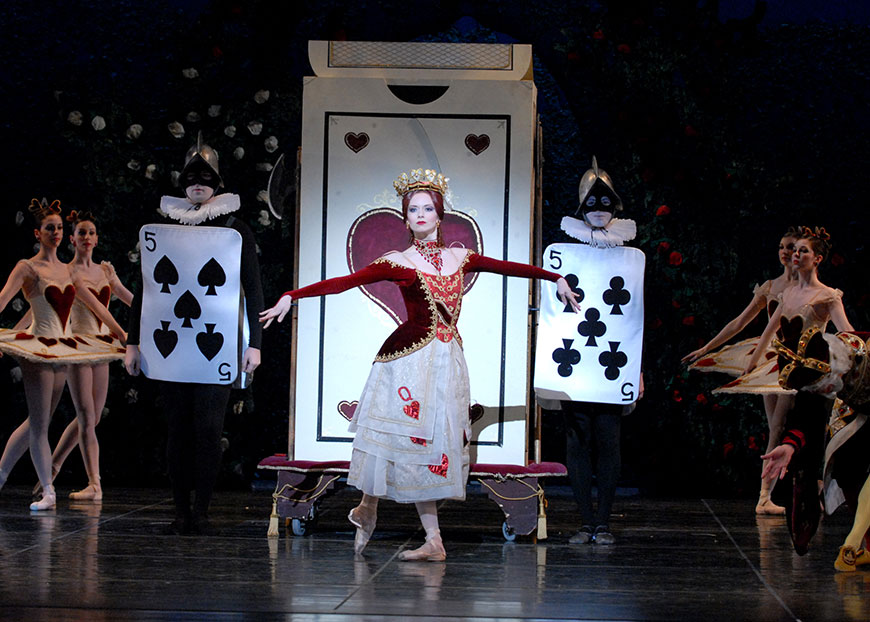 And you’d never guess he didn’t compose the score specifically for this production. The score is a masterful medley of Tchaikovsky orchestrations arranged, and added to, by Carl Davis. The score includes 15 excerpts from Tchaikovsky’s “Album for the Young” among other whimsical choices. 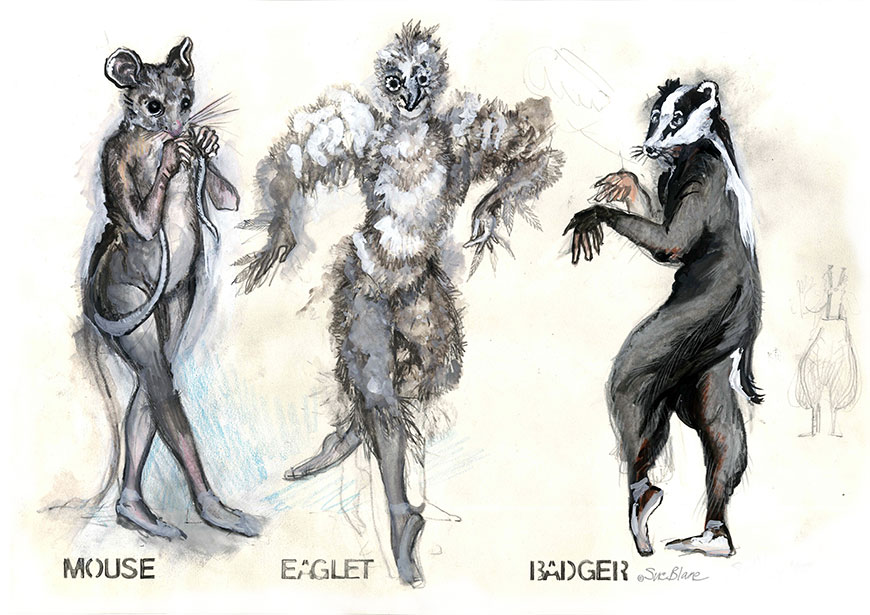 The production features costume and set designs by Sue Blane, costume designer for the original stage and screen versions of the “Rocky Horror Picture Show,” and illusions by Paul Kieve, who consulted on some of the Harry Potter films. The concept and choreography come from inventive choreographer Derek Deane, who originally created the work for English National Ballet, the company he led as artistic director for nearly 10 years. Dean was awarded the Order of the British Empire for Excellence in Dance in 2000, and he’s choreographed three world premiere works for PBT: Hungry Heart . . . We All Have One! (2004), Simply Simon (2005) and Anything Goes! (2006). 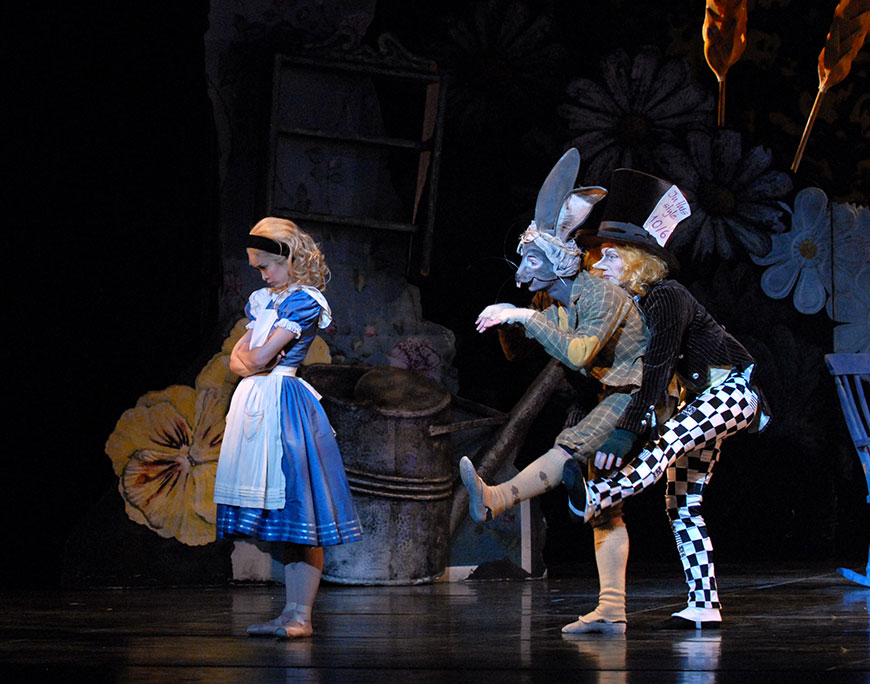 The wardrobe is utterly transformative. With 90 costumes, it brilliantly brings to life the curious characters Alice meets along her mind-bending journey – favorites from the original Carroll story like the White Rabbit, Mad Hatter, Cheshire Cat, Caterpillar and Queen of Hearts. Wardrobe also includes 18 wigs and 30 prosthetic pieces, like the Mat Hatter’s nose and chin, the White Rabbit’s nose, upper lip and ears, the Duchess’ jowls, nose and ears, and the Caterpillar’s nose. The character makeup can take hours for each performance. 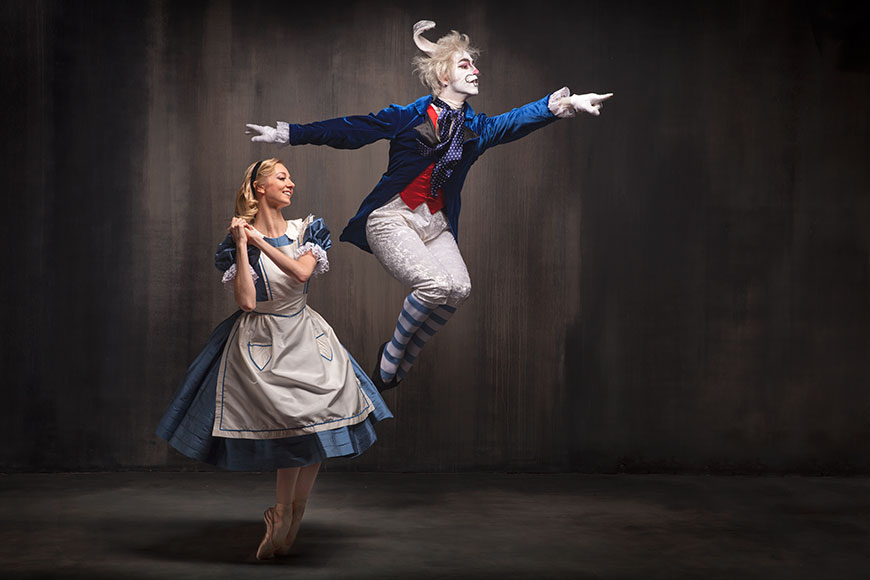 Don’t let the production value fool you – the choreography holds its own alongside the madcap illusions and scenery. For each of the Lewis Carroll characters, Deane has devised a quirky movement vocabulary – like the undulating dance of the Caterpillar or the harried hops (and virtuosic solos) of the White Rabbit – to give them space to show off both personality and technique. The production also taps into the classical sweep of the corps de ballet – first as a twirling garden of Tiger Lilies, Pansies and Sweet Peas and then as a deck of cards with square tutus and a neoclassical edge to their movements.

PBT presents Alice in Wonderland Feb. 10-19, at the Benedum Center for nine performances, including a 7:30 p.m. Valentine’s Day performance. Don’t miss this very important date. Get your seats before it’s too late!