“After a thorough and comprehensive search over the past nine months aided by Management Consultants for the Arts (MCA), we are thrilled to announce that Susan Jaffe, currently Dean of Dance at the University of North Carolina School of the Arts (UNCSA), will become PBT’s next artistic director,” Board Chair Dawn Fleischner.

“Susan brings a dynamic set of skills and valuable experience gained working in the arts since retiring from her illustrious dance career,” Fleischner added. “In her most recent role at UNCSA, she built a thriving program centered on dancer health and well-being, creating strong community connections while striving for students to achieve high-quality artistry.”

Jaffe will assume the role of artistic director for PBT’s 2020-2021 Season opening in October.

“I am thrilled to take the helm of Pittsburgh Ballet Theatre as its new artistic director,” said Jaffe. “Leading PBT artistically is a dream come true for me, and I look forward to working with the dancers and everyone in the organization to bring it to its future. Additionally, I am honored to be in the lineage of the artistic directors of PBT who have developed a vast array of repertoire, from the classics to contemporary ballet.”

Jaffe joins the ranks of the company’s distinguished artistic directors, including founding artistic director Nikolas Petrov; Patricia Wilde who, during her tenure from 1982 to 1996, invigorated the company with her refined technique and the works of modern masters; and Terrence S. Orr, who has led the company since 1997, elevating its repertoire through his artistic vision and creative collaborations.

“I have known Susan for a very long time,” said Orr, “and I’ve been proud to know her all these years. I think that she will be a wonderful artistic director for Pittsburgh Ballet Theatre and we are very lucky to have her leadership for the years to come.”

“Susan is extremely impressive and a fabulous candidate who is up to the challenges that the world is currently facing,” added PBT Executive Director Harris Ferris, “having pivoted her own organization to address the coronavirus.” 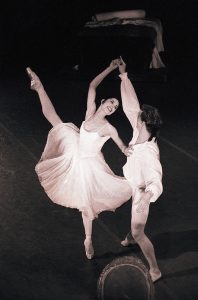 After her retirement from the stage in 2002, Jaffe was appointed advisor to the chairman of the board of ABT, working closely with them from 2002-2007. During that time, she became a teacher at the Jacqueline Kennedy Onassis School of American Ballet Theatre, which ultimately inspired her to co-found and co-direct Princeton Dance and Theater Studio (PDT) in Princeton, N.J. in 2003. In 2010, Jaffe was appointed Ballet Mistress of ABT and in 2012, she was appointed Dean of Dance at the University of North Carolina School of the Arts (UNCSA) in Winston-Salem, NC.

During her tenure at UNCSA, Jaffe, in collaboration with faculty, produced and implemented a syllabus based on the ABT National Training Curriculum for all levels of the program. She was involved in the development of a dance outreach program for a Title 1 community in Winston-Salem, N.C., and developed and fundraised two scholarships to provide a complete dance education to students on the basis of merit. Jaffe also established the Choreographic Institute of UNCSA, a summer program that nurtures promising choreographers, creating opportunities for them to expand their craft.

Jaffe was New York Magazine’s Woman of the Year in 1998. In 2003, Dance Magazine honored her with a Lifetime Achievement Award. And in 2010, Jaffe received an honorary doctorate from Texas Christian University.

About the Artistic Director Search

PBT began the search for its new artistic director after the June 2019 announcement of Terrence S. Orr’s retirement. The PBT Board of Trustees formed a search committee, co-chaired by Dawn Fleischner and Mary McKinney Flaherty, and selected David Mallette and Jason Palmquist of Management Consultants for the Arts (MCA) to conduct the search for PBT’s new artistic director. MCA’s extensive information gathering process included interviews with PBT senior management, administrative and artistic staff, company dancers, board members, and key stakeholders. Based on this process, MCA and the Search Committee created a position profile that was posted in early October.

Throughout the search, the strong reputation of the company and Pittsburgh’s own robust arts and culture community proved to be draws for a diverse pool of candidates. MCA evaluated over 150 ballet professionals from the United States and abroad. From the applicants, MCA presented 14 accomplished candidates for closer review. The Search Committee elected to interview eight of those – four men and four women, including three persons of color. Ultimately, Jaffe was chosen from among the four final candidates.

“Our committee was impressed with her vast experience and creative vision that directly align with the goals of our candidate search,” Fleischner said.

“The volunteer search committee was able to persevere against the headwinds of this crisis and stay firmly on schedule to announce the new artistic director,” Ferris noted.