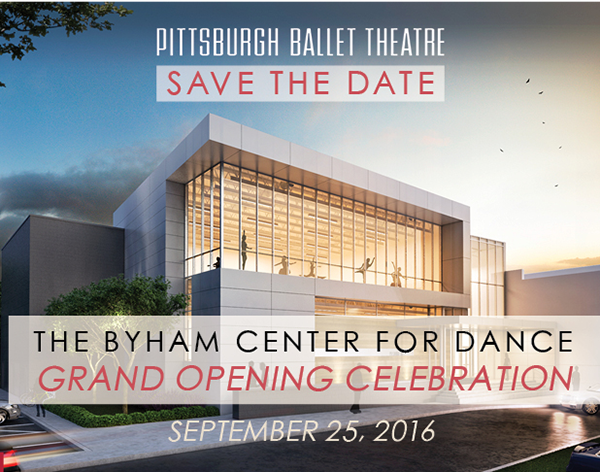 Starting in September, Liberty Avenue passersby will be able to see into Pittsburgh Ballet Theatre’s new studios from the street – a design feature that’s symbolic of the company’s mission to welcome more people inside.

As part of that goal, Pittsburgh Ballet Theatre will celebrate the Grand Opening of the Byham Center for Dance with a free community day from 12-4 p.m. Sunday, Sept. 25, at its newly expanded Strip District campus.

The open house event invites Pittsburghers to step behind the scenes of their ballet company and take advantage of the growing resources inside.

From pre-ballet for children to new Pilates, dance cardio and conditioning classes for community members, PBT will be widening its class offerings starting this fall. Classes will be built around core strength, coordination and alignment – essential building blocks for dance and other athletics.

“The grand opening will be a celebration of dance and the many ways that it can enrich our lives,” said Harris Ferris, PBT executive director. “Dance is universal – whether it’s for fitness, fun, self-expression or your life’s work. We want this facility to serve the community as a resource for dance-based training, fitness and learning.”

Full of ways to get moving, the free Grand Opening Celebration will feature sample ballet and conditioning classes, performance demos, photo opportunities, food vendors, music and children’s activities as well as opportunities to sit in on company rehearsals, tour the costume shop, meet the artists, learn conditioning tips and get a closer look at tutus, pointe shoes and other tools of the trade. Community members can register for the free event here.

The night prior – Saturday, Sept. 24, – PBT will inaugurate the space with a private reception for campaign contributors, featuring a private company performance and dedication of named spaces, including the Fleischner Family Studio, Catharine and John Ryan Studio, and Hilda and Freddie Fu Sports/Dance Conditioning Center. The building itself is named in honor of Carolyn and Bill Byham.

“We hope guests will discover something new about dance and the many ways we can use movement to inspire and empower ourselves,” said Artistic Director Terrence S. Orr. “For alignment, expression, exercise and coordination, ballet offers incredible benefits for the mind and body. We look forward to inviting in more dancers – whether they are just starting out, returning to it, or looking for a place to pursue it on a professional level.”

Along with PBT’s physical expansion, a new manager of dance fitness will lead efforts to grow PBT School’s community division for teens and adults. The school will be rolling out new sessions of community dance and conditioning classes, which guests can try at the event.

The new space also will help PBT School expand its Children’s and Student divisions as well as its Pre-Professional division, an internationally recognized training program for students pursuing careers in dance. Over the next three years, PBT projects a 40 percent increase in admissions across its four training divisions.

The building is the culmination of a four-year project that PBT started in November 2012 with the purchase of the former Liberty Mart lot next door. Construction started in October 2015.

As headquarters to 30 full-time professional dancers and over 1,000 students – plus the company’s costume shop, therapy and cross-training facilities – space was at a premium for the company and the school, which had seen a 75 percent enrollment rise in its Children’s and Student divisions over 10 years.

Major contributors include Campaign Co-chairs Carolyn and Bill Byham, Campaign Co-chairs Dawn and Chris Fleischner and the Commonwealth of Pennsylvania, which has invested a total of $2.25 million through the Redevelopment Assistance Capital Program toward the annex and other campus expansion projects since 2009.

PBT continues to seek support for a $2 million reserve fund for the building and other campaign priorities, including endowment and innovation funds to support repertory, live music, student scholarships and other artistic objectives that impact PBT audiences from season to season. Those interested in contributing can visit www.pbt.org/campaign or call 412-454-9133.

The building is the capstone of PBT’s seven-year campus expansion project.