PBT School student Sophie Sea Silnicki, 16, is one of only seven female dancers from the United States selected to compete in Switzerland’s 42nd Annual Prix de Lausanne international ballet competition, Jan. 27, to Feb. 1, 2014.The Prix de Lausanne is an international competition and educational workshop for pre-professional dancers, ages 15 to 18, of all nationalities. Since 1973, the competition has discovered, promoted and supported the world’s finest young dancers. This year, a total of 295 dancers — 224 females and 71 males — of 35 different nationalities auditioned via video submission for the Prix de Lausanne. A panel of dance experts chose 71 of those candidates, including a total of 10 U.S. male and female dancers, to compete in the competition in Lausanne, Switzerland. Read more about Sophie’s participation in the contest here.

Here, Silnicki blogs from Switzerland about the competition experience:

Day 1 – January, 26, 2014
I honestly can not believe that I am in Lausanne and am so excited to begin this amazing journey. I started the day out with my first ballet class in the theater with all the candidates. Then, I had available time to try my variations in the studio with the raked floor (sloped floor). When I first walked into the studio and saw the floor, I got really scared. Trying to not even think about the rake, I confidently went through my classical variation. It went so smoothly and I felt very much at ease. I didn’t have a problem turning, and my contemporary variation went just as well. Next, I had a short break and then went back to the theater for orientation. The staff explained everything that will happen throughout the week and I received my number, 122 (one tutu)! I am looking forward to working with and taking class from the jury members; it is going to be an exciting week. – Sophie Sea Silnicki

Day 2 – January 27, 2014
My first day with the jury watching! I began the morning with a ballet class taught by S. Arndt, with the jury marking. I am in Group A, which has 23 female candidates ages 15-16. Then, I had a run-through of my classical variation onstage for the first time. I still had butterflies before going on, but my fears went away as soon as I stepped foot on the stage. Traveling straight across the stage felt quite different on the rake, but the manege (circle around the stage) was surprisingly easy. Next I had contemporary class with D. Rownes. I really enjoyed moving in his class. Our evening ended as it has for the past three, eating dinner, sharing stories, and laughing with my mom, grandma, and Polly (& stretching!). – Sophie Sea Silnicki 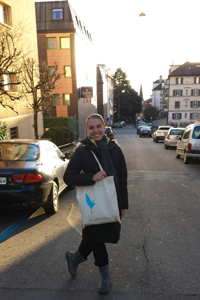 Day 3 – January 28, 2014
My day started early today. I went to the theater at 9:00 to prepare myself for contemporary class at 9:30. I then had a long break during which I streched and watched the mens contemporary class. It was interesting to watch the men dance the same combinations I learned in class and observe their movements. Next, I had ballet class with the jury watching. My favorite part of the class was the enchainement at the end because I really enjoyed the combination of quick jumps, leaps, and turns. At the end of the day, I had coaching for my contemporary variation. This was definitely my favorite thing at Prix so far. I loved working with the coach, Nancy Euverink, she made the choreography all make sense. It’s time for bed, I have an even earlier day tomorrow. – Sophie Sea Silnicki
Day 4 – January 29, 2014
It has been a really long day. I started with 8 a.m. ballet class, and then had a break to stretch my legs and my feet (and eat an orange). Next, I had coaching onstage for my classical variation with M. Loudieres; it went really well. She said I looked strong and in control and gave me helpful corrections, which I have applied to my variation. Lunch was provided (as it is daily) for all the candidates in the lounge (the room has giant windows with a magnificent view of the Alps!) I had contemporary variation coaching with the jury watching again onstage. It was helpful to run the variation with the coach onstage with me. My day at the theater ended with a special treat. I was able to catch the last part of Dance Dialogue with special guest and jury member, Julio Bocca. How special it was to see Mr. Bocca up close and in person and listen to him speak about his career.  What an honor! It’s amazing to be in the theater all day surrounded by inspiring dancers! – Sophie Sea Silnicki
Day 5 – January 30, 2014
My last full day of classes; I started out the morning with a short ballet warm-up at the theater. Then I went straight into contemporary class with the jury marking. The class went well and I felt like I was freely moving. Next I had a break, so we got a chance to go to the city center for a quick walk. Then it was back to the theater for more coaching on my classical variation. I performed in the studio with the raked floor and the balcony was open for teachers to observe. It was a very stressful environment with everyone looking down on the rehearsal floor, but I was able to keep my nerves under control. It has been a great opportunity working with the coaches; they keep adding more advice and corrections, which have definitely helped me. At the end of the day, I went again to the daily Dance Dialogue. The guest was the lovely Alessandra Ferri ( also on the jury). She talked about sharing with the audience and being an artist. I hope her message will help me express myself on stage tomorrow. 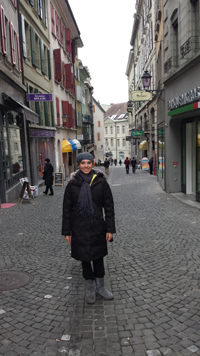 Day 6 – January 31, 2014
Performance day! I woke up early to get ready and prepare for my variations before going to the theater. I had a quick warm-up class at 8:30 on stage, and then it was time for the competition to start. I was one of the last candidates to perform in my age group. As soon as I stepped on stage for my classical variation, Swanhilda, I felt a rush of emotions, not believing that I was actually performing in the Prix de Lausanne. I felt really absorbed in my character and in the back of my mind were still all the corrections and advice everyone at PBT had given me. After my classical variation was finished, I was very excited to go into my contemporary variation. I felt very secure, on the music, and able to just dance for the joy of it. After my contemporary, my mom told me that her favorite part of the week of Prix was my bow after my contemporary variation because she felt that I had turned into a true performer.
After the competition, we (Polly, my mom & grandma) all went into the city  to visit some of the Swiss chocolate shops. We each tried a different truffle.  Yum!  It was fun just walking and window shopping.
Later in the evening, we returned to the theater to see the posting of the competitors for the finals. Although I’m not dancing in the competition tomorrow, I am excited to watch the talent that will be onstage and to share the night with my mom, grandma and Polly. I am proud of what I have accomplished this week and am looking forward to the networking forum for the next few days. I am thankful for Polly and all of the PBT School faculty for preparing and supporting me on this journey! I want to thank PBT Costumier Janet Campbell for the lovely costumes; they sure helped me feel good onstage! Also, thank you to my family and friends for all the support!
Much love from Lausanne!
-Sophie Sea Silnicki
Day 7 –  January 1, 2014
My day started out with the Networking Forum ballet class in the morning. There were many school directors watching. I felt good about the class. Then I had a feedback meeting with one of the jury members, Gigi Hyatt, which went well. At 1:00 the numbers were posted on the screen backstage of the candidates with offers, I was excited to see one tutu on the screen. I was offered summer and year entrance to English National Ballet School, one year free tuition to The Royal Swedish Ballet School, and full summer scholarship and possibly more to San Francisco Ballet School. Then at 3:00 we went to Theatre de Beaulieu to watch the finals. It was very inspiring to see all the talent. Afterwards there’snu was a party backstage for all the candidates.  My favorite part was meeting Jorma Elo the choreographer of First Flash Solo 2 which is the contemporary variation I performed. I had a lot of nice feedback from some of the jury and coaches. This has been an amazing experince and journey that I will never forget.
Merci beaucoup!
Au revoir Lausanne!