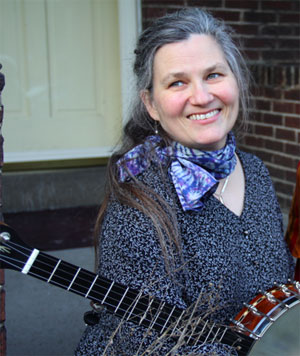 Although PBT School pianist Ellen Gozion is well-known at PBT for her classical accompaniment, she will travel to New York City this month for a major musical accomplishment of a completely different genre – American folk music.

In just a few weeks, Gozion will join Pittsburgh-based ensemble Chatham Baroque as finalists in the live audition round for the U.S. State Department’s American Music Abroad 2013-2014 Season.

When she’s not in the studio accompanying PBT School ballet classes, Gozion specializes in folk singing and banjo playing, and most recently teamed up with Chatham Baroque as a guest musician for the group’s American Music series.  In a unique cross-over collaboration, the traditionally classical Chatham Baroque chose to feature Appalachian music for the series and for the musicians’ American Music Abroad bid.

More than 300 U.S. ensembles representing a wide array of musical genres applied for the American Music Abroad live auditions. Gozion and Chatham Baroque are among only 40 finalists chosen for the live auditions. At the end of the live audition round, 10 ensembles and two alternate ensembles will be selected for a month-long international tour with the American Music Abroad program, which sends American roots music groups of diverse genres to more than 40 countries to present concerts, performances with local musicians, workshops and other projects to engage diverse audiences.

Despite the stylistic differences between classical and folk music, dance remains the common link between Gozion’s primary musical passions. As a music student at The University of North Carolina Greensboro, Gozion first discovered her affinity for folk through dance.

“I found out about it through dancing when I was in my 20s and that’s how I got into playing for folk dance,” Gozion said. “For me, [folk and classical music] serve different purposes in a way. The folk is very social…music doesn’t stand alone, it always accompanies an event…and classical music tends to be a more inward, personal experience for the audience. It’s powerful in a different way,”

At the American Music Abroad live audition round in New York City, Gozion and Chatham Baroque will perform some of their own musical repertoire and will also be challenged to arrange a new variation combining folk tunes from Turkey, China and Russia. Gozion will also lead a folk dance lesson as an example of a community engagement program to offer abroad.

“I am excited that we were chosen…“I think it would be really exciting to travel,” Gozion said. “We’re trying to preserve this folk tradition in a modern era.”