In the world of ballet, true love knows no bounds. It shatters curses and penetrates enchanted slumbers. It can strike by a moonlit lake, in a forest glen, through a dream. Prince Siegfried saw his love in a swan. Giselle’s love literally followed her to the ends of the earth.

Even beyond the classical canon, love doesn’t stop at the stage. For these three couples, ballet launched their true-life love stories. 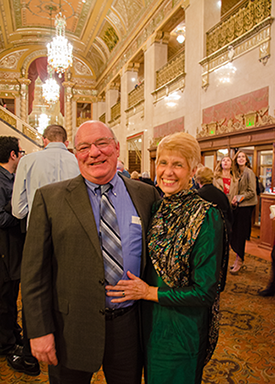 Forty years ago, Joe Finnegan asked a pretty girl for a date. The fellow CMU students walked to the Syria Mosque to take in a free, Pittsburgh Ballet Theatre performance.  Afterward, they strolled down Forbes Avenue, stopping at Isaly’s for an ice cream cone.

Forty years later to the date, Joe brought that girl – now his wife of 38 years – back to the ballet company that brought them together.

The two drove from their home in Virginia to celebrate the anniversary of their very first date at PBT’s Oct. 23, performance of Mixed Repertory #1 at the Benedum.

“We haven’t done anything this crazy and spontaneous for a long time,” Terri said. “The dancers were just indescribable. I think the thing that struck me was their apparent joy. You could see on their faces just how thrilled they were just to be out there performing.”

Forty years ago, her future husband impressed her with the same kind of date.

“That was our date – ballet and an ice cream cone. I thought you had class!” Terri said, laughing. “I danced my whole life. My mother owned a dancing studio. I probably danced before I walked but I was never a prima ballerina.”

Although Joe says they aren’t huge “anniversary” people, he made it his mission to pinpoint the date of that first date. With a bit of assistance from PBT’s archivist, he soon saw they could recreate it.  He surprised his wife with ballet tickets and an impromptu trip to Pittsburgh.

“We’d never been the Benedum. Wow. It’s just gorgeous,” Joe said. “I appreciated the athleticism and the amazing precision and ability. We got to hold hands while they danced. “ 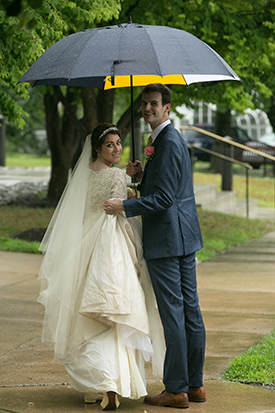 As Kelsey’s Grandma Gertrude would say, this match made at the Benedum Center was an act of “divine providence.” Two years ago this weekend, Kelsey and Adam Roob first shook hands under the Benedum’s crystalline chandelier, steps away from the set of PBT’s Swan Lake.

It was a snowy Valentine’s weekend, when fate drew together two out-of-towners for one of ballet’s greatest love stories. Kelsey was in town from Virginia visiting her two grandmothers. Adam, also a Virginia native, had set out for the ballet from Steubenville, Ohio, with a group of college friends. Neither was expecting to meet their future spouse.

One chance encounter and chatty grandma later, and the two groups had met over a few post-show photos in the theater. Kelsey and Adam describe it as chitchat, though they discovered they had one big thing in common. Both attended familiar Catholic colleges; Kelsey was a graduate of Christendom College and Adam was attending Franciscan University.Kelsey would later reflect that, in many ways, Adam was an answer to her prayers.

“We just met, shook hands and then went our separate ways,” Kelsey said. “I didn’t think we’d ever see these people again. It was just sort of a fun encounter.”

“For some reason he left with the impression that there were good vibes,” Adam said.

It turns out he was right – a premonition that helped clinch his best man status less than two years later. His goodnatured peer pressure pushed Adam to pursue Kelsey beyond the Benedum doors.

“I saw they had taken a right from the Benedum. It was a snowy week and Valentine’s Day weekend. I run down the sidewalk and they’re about to cross the street and I catch them. I just asked her for her number on the corner there, by her grandma, and she gave it to me,” Adam said. “It was definitely exhilarating.”

Fast forward a few long phone calls and many dates later, and the two officially became a couple. Now, Kelsey and Adam are happily married and expecting their first baby in May.

“It was pretty perfect,” Kelsey said of the romantic backdrop for their first meeting. “I would say Swan Lake is probably my favorite and that was the first ballet that Adam had seen…He was very intentional in his pursuit of me, which is very refreshing. We knew really early on that we wanted to be married and spend the rest of our lives together.” 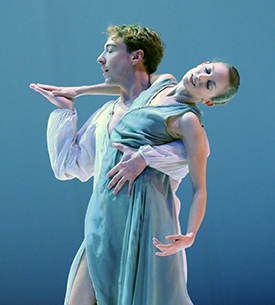 Technically principal dancers Alexandra Kochis and Christopher Budzynski met on the job. But, imagine a job that requires you and your partner to channel Romeo and Juliet, Odette and Siegfried, Aurora and Prince Desire, portraying some of the most iconic love stories of all time. This is not your typical 9-5.

“We took our partnering classes most Saturdays. That was probably the first time I ever saw him,” Kochis said. “It was a long time coming that a plate of spaghetti and meatballs would bring us together, just the two of us, during a long run of Nutcracker.”

Fittingly, they first went out on a dancer double date at a restaurant across the street from the Wang Theatre, home of Boston Ballet’s The Nutcracker. Budzynski and his friend serenaded their dates with What a Wonderful World courtesy of the restaurant’s weekly piano singalong.

“Chris sang the whole thing in a Louis Armstrong voice. I think he had me right there,” she said.

Years later, now fellow principal dancers at PBT, their love lends an extra level of realism to their work.

“A lot of people say to us, ‘I don’t know how you can live and work together?! But for me, I can’t really imagine it any other way,” Kochis said. “Ballet is a common language to us. We can bounce ideas off one another and we support one another, both physically and mentally. I think that seeing Chris’ passion for life come through in his dancing is one of the biggest reasons I was attracted to him in the first place.”

The characters they explore together also add a level of discovery, and rediscovery, to their regular relationship.

“Sometimes it’s like we are two spirits getting to experience different lives, characters and stories… and falling in love again, regardless of the differences,” Budzynski said.

One of those standout moments was in 2009, when the couple took on the title roles of Jean-Christophe Maillot’s Romeo et Juliette, a vivid rendering of the tragic love story.

“For obvious reasons it was incredibly romantic – to everyday relive and try to channel those feelings of new love, and first touch and overwhelming abandon. But it was also an incredible artistic stretch to try and tackle this contemporary take on the familiar story,” Kochis said.

“It encompasses such a swirl of emotions between Albrecht and Giselle and the ethereal partnering in the second act brings you to such a heightened state of sensory awareness with one another,” Budzynski said. “Many people that have not been to the ballet often wonder how a complex story can be told without words…I feel that body language and facial expressions are the purest form of emotion.”

That passion and devotion to their craft remains one more bond between them. And the romanticism doesn’t hurt.

“I think the fact that there are no spoken words in ballet is what makes it so romantic,” Kochis said. “It is a chronicle of the human experience, its basest emotions, but related solely through music, movement and intention. Heart to heart.”

Sub-title
3 Couples Who Found Love at the Ballet