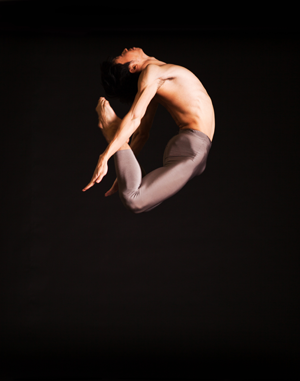 Pittsburgh Ballet Theatre Artistic Director Terrence S. Orr has announced that PBT dancer Yoshiaki Nakano has been promoted to Soloist for the 2013-2014 Season.

A four-year PBT company member, Nakano has delivered standout performances in PBT productions, including the virtuosic jester in Septime Webre’s “Cinderella,” Mark Morris’ “Drink to Me Only With Thine Eyes,” the Prince in PBT’s “The Nutcracker,” the Peasant Pas de Deux in “Giselle” and other featured roles both in Pittsburgh and on tour with PBT. In July, Nakano’s dancing received international notice when he won the gold medal in the Men’s Senior Group at the 2013 Bejiing International Ballet and choreography competition, which was judged by world-renowned dancers, including Angel Corella, Yuan Yuan Tan and Julio Bocca.

“Yoshi has always been a star in his own right,” said PBT Artistic Director Terrence S. Orr. “He’s really coming into full maturity as an artist, and I’m looking forward to giving audiences an opportunity to see more of his talents this season.”

A native of Japan, Nakano received his early training at the Elite Ballet Studio in Osaka, Japan. He later trained at San Francisco Ballet School and Pittsburgh Ballet Theatre School’s Graduate Program. In addition to his 2013 award at the Beijing International Ballet and Choreography Competition in China, Nakano earned the silver medal at the 2010 World Ballet Competition in Orlando, Florida.

Audiences will have the chance to see Nakano perform in PBT’s 2013-2014 Season opener, “An Evening of Twyla Tharp” – featuring “Nine Sinatra Songs” and “In the Upper Room” – onstage Oct. 25-27, at the Benedum Center. Nakano will be performing as a “Ballet Boy” in Tharp’s powerhouse work, “In the Upper Room.”

Set to the iconic songs of Frank Sinatra, Pittsburgh Ballet Theatre opens its 13-14 Season with “Nine Sinatra Songs,” a glamorous blend of ballet and ballroom movement created by award-winning choreographer Twyla Tharp. Paired with Tharp’s powerhouse work “In the Upper Room,” this duo combines iconic names in entertainment, including songs of Sinatra, works of Philip Glass and costumes by Oscar de La Renta and Norma Kamali. “An Evening of Twyla Tharp.” Onstage Oct. 25th to 27th at the Benedum Center. For tickets, click here or call 412-456-6666.