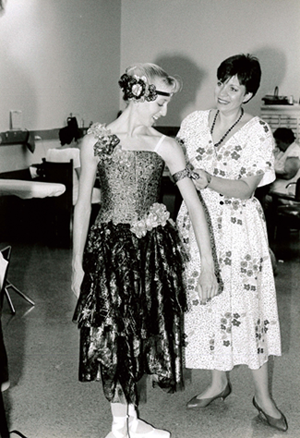 Pittsburgh Ballet Theatre Costumier Janet Groom Campbell’s office is like the unofficial archives of PBT. Forty years of mementos cover the walls, from framed costume sketches and autographed pointe shoes to a signed letter from Sting and relics from other artistic collaborations.  Her photographs span the stars of PBT’s company dancers, its artistic directors and even its founders – Loti Falk and Nicolas Petrov.

In 40 years with Pittsburgh Ballet Theatre, Campbell’s career encompasses more than 500 tutus, 200 productions and six artistic directors. On tutus alone, she has dedicated more than 20,000 hours to sewing, embroidering and adorning by hand since joining the company on July 17, 1973 – less than four years after the 44-year-old company’s founding.

“I enjoyed fashion, but someplace in my heart there was always ballet,” Campbell said. “I turned the dance theatre sewing into a finer work…I was like a sponge. I wanted to learn everything they could teach me,” she said. “That’s how I learned so fast.”

PBT’s full-length production of Cinderella in 1973, officially initiated Janet into the world of ballet theatre. The grand-scale production had the costume shop working in overdrive to ready the wardrobe for wear, even running costumes from the shop to the theater before each act.

“Somehow we got everything done for the opening,” Campbell said. “It was exciting. It sort of hooked me, because it was such a mountain to climb to get it all done and make it look wonderful. It was a beautiful ballet.”

A relative newcomer to ballet, Campbell held natural appreciation for the art form from her first time seeing dancers in rehearsal at PBT Studios. The experience reinforced her own commitment to her craft and set the bar high for her job performance.

“I remember the first time I watched a rehearsal. I was amazed by how hard the dancers were working,” she said. “I also realized that I could never ever make them anything that would inhibit the choreography that they were given.”

Four years after working on her first production with PBT, Campbell ascended to costumier and took on responsibility for overseeing the entire PBT Costume Shop – from designing, building, budgeting and fitting costumes to ordering more than 1,000 pairs of custom-made pointe shoes a year for PBT ballerinas.

Much of Campbell’s success stems from her seamless combination of both the picturesque and practical. Before they can evoke the magic, illusion and ethereal feeling onstage, costumes must be engineered behind-the-scenes to accentuate choreography, accommodate movement and withstand constant body contact and quick changes. Costumes must move with the choreography, but still flatter a dancer’s form; yield to partnering, but spring back to shape; appear rich and delicate, but withstand years of alterations and upkeep in order to be cost-effective for a ballet company.

“In dance, you really have to make them well because of the body contact, the partnering…the physical feeling of dance…so (the costume) would make every movement they made that much bigger,” she said.

In 40 years with PBT, Campbell has brought the visions of countless costume designers to life and conceptualized and created her own designs for ballets like “The Mighty Casey” and “Theme and Variations.” Some of her most memorable moments with PBT are creating costumes for completely new ballets for the company, like the full-length premieres of “The Great Gatsby” and “Romeo et Juliette.”

Requiring up to 80 hours per tutu, her handmade costumes often accompany her home at night and have even traveled as far as Munich, Germany (Tinkerbell) and Bermuda (McTavish kilt from The Nutcracker) to take advantage of any spare moment for stitching.

Apart from her career, PBT has played a principal role in Campbell’s personal life. She met David, her husband of 32 years in the company, and her daughters Katie and Kerri grew up in the costume shop, inheriting their mother’s deep appreciation for the art form.

“I love my job. I love building costumes. I love the challenge of engineering them. I always feel like the costume is mine until opening night, and then it’s theirs, everyone in the audience. It’s magical.”

View a photo gallery looking back on snapshots from 40 years with Pittsburgh Ballet Theatre here.

First assignment in the PBT Costume Shop…
Five Grecian sailor hats for a character dance choreographed by PBT’s founding Artistic Director Nicolas Petrov. “I was very determined to get the job, because it was just a dream come true. I came in and made all five hats in one day.”

Concentration Trick…
Humming the score as she sews. “It’s the music that really gives the heart to the entire production.”

Most Memorable Quick Change…
“I was quick changing Dagmar Kessler in Cinderella…There were these four men in the most beautiful, sculptural deer heads with silver antlers. I had just finished fixing her cape, I was a second ahead… and I look up and there are the reindeer. They were talking, and all of their antlers were (tangled)…I ran over there, and I quickly untangled them…and there was the music, she had to be out there! They just made it. So I said to them, ‘No more talking in reindeer heads!’”

Favorite Ballet…
Swan Lake. “It’s a true, phenomenal classic. If you listen to the music, it’s just incredible…you can hear it all in the music – her fear, her shyness…she falls in love, she opens up, she trusts him.”

Costuming the Corps for Swan Lake…
“It is a challenge…The swans are incredible, the movement. It was hard building all of those swans, because each one takes so long…With a classical tutu you have to have all of the layers of netting at the exactly right angle on the girl’s body…, and everybody is totally different…so you’ve got 18 totally different postures and you have to make sure that you get it all at the right angle.”

The Most Challenging Part of Costuming…
“I think one of the hard parts is dress rehearsal, because…It’s the first time you see everybody together…then you quickly have to look and make sure that everybody’s hems are right, sleeve lengths are right and that everything works. It’s also the first time they really dance in them, so that’s when you really find out if all of the choices you made were correct …But it’s also rewarding because you get to see everybody and how wonderful they look.”

Opening Night Nerves…
“I get nervous, but when I first started working here I realized that I had to remain calm. I trained myself to be calm…I realized that if I remained calm, I would get everything I needed to get done.”

Keeping Calm Through Quick Changes
“I used to do a lot of quick changes, because I was extremely quick…(The dancers are) anxious, they have to get out there again, and they’re thinking about what they have to do next…and I just say, ‘you’ll be fine, everything will be fine’…so they relax…the music never stops. It all has to be on the music. When their beat is on, they have to be out there…they have to be right on the mark.”

Keys to Success…
“Patience and perseverance.”

What Makes It Rewarding…
“I like hearing the music. I like walking in the door in the morning and hearing the piano play in class… I like seeing jewels sparkle onstage, I like trimming tutus, putting things together, getting little bits of this and that and making something gorgeous.”

Favorite Costume She’s Built…
“I do truly love The Mighty Casey. I had a ball making Betsy. We got the most beautiful, embroidered organza, and she wore this little hat, and it had a little bow on the back, and I just loved watching that little bow float through the choreography…It’s always good if you do a production that’s born here…it’s just nice collaboration.”

Creating Costume Designs…
“I usually do all my mockups on a mannequin. A lot of choreographers were amazed, because they’d go into rehearsals and then come back and I’d have a costume they’d been describing on a mannequin.”

Creating that First Tutu…
“I had to teach myself how to make tutus…I’d get better and better…The first tutu that I made that I thought was absolutely positively perfect… it wasn’t until they put it on in the studio (that I realized the back flipped up like a duck tail)… You have to have a dip in the back and that’s the day that I learned that….so I took it home and I ripped all the ruffles off and lowered them and re-tacked them (six hours of work), and it was absolutely perfect…It’s a lot of engineering and it all has to work. You have to have the waist on the classical tight, because that’s the only anchor to keep it where it should be.”

Tutu work of art that stands out that she created:
“I love Theme and Variations. I love the tutus and the jackets. I was so proud of the jackets as well because I designed them in a way that the boys looked really broad-shouldered… Theme is such a beautiful, beautiful ballet, the pomp and the circumstance and that promenade at the end…it’s just unbelievable.”