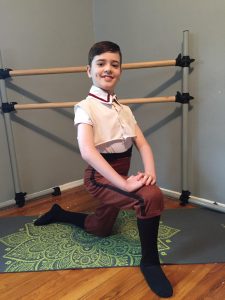 Fritz is Marie Stahlbaum’s pesky younger brother in The Nutcracker.  For anyone who has a sibling, there is a familiarity to his relationship with Marie.  They love each other, but Fritz is also a master of pushing buttons.  One could argue that without Fritz, The Nutcracker story would cease to exist.  He is the one who breaks Marie’s beloved Nutcracker and causes her to bandage him and sleep with him under the Christmas Tree.  It is also his toy soldiers who fight the mice and set the chain of events in motion that cause the Nutcracker to become a Prince and send him and Marie into a journey to the Land of Enchantment.

This year, Pittsburgh Ballet Theatre School student Ryan Sharp is one of the dancers who will portray Fritz in The Nutcracker.  We asked him a few questions about his thoughts on the role and ballet in general.

How long have you been dancing with the PBT School?

Since I was four years old.

Have you danced anywhere else?  If so, how long?

I have only gone to PBT for the school year. I did go to American Ballet Theatre, the Washington Ballet, and Point Park for virtual summer programs.

Are you from Pittsburgh?

How many times have you danced in The Nutcracker?

This is my fifth time.

What other roles have you performed in The Nutcracker?

I’ve been a party boy, soldier, and carousel. 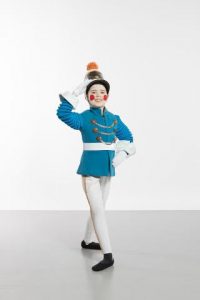 Which one was your favorite?

I  liked being Heinz [party scene boy]. It was a really fun role.

What makes you the most excited about being Fritz?

Working with the company so much and all the different things you have to do on stage.

How much alike are you and Fritz?

Not very much, but I could see myself accidentally hitting someone with a tricycle.

What would your dream Nutcracker role be?  Dream overall ballet role?

In The Nutcracker, it would probably be Mctavish [party scene adult]. I have too many choices for the second one.

Do you want to be a professional dancer?