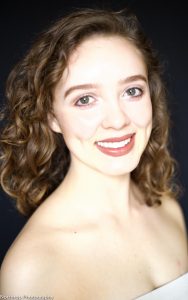 Allison Durand, a PBT School student since 2016, is no stranger to Pittsburgh Ballet Theatre audiences. As a student, she has performed in Giselle, Alice in Wonderland, Romeo and Juliet, Rubies, The Great Gatsby and The Nutcracker with PBT. This season, she makes her official company debut. Get to know Allison, one of Artistic Director Terrence S. Orr’s new hires for the 2019-2020 Season, here:

Family: “My younger sister Katie, mom and dad, and Lucy the beagle.”

Pre-performance ritual: “Eat my favorite breakfast smoothie while I read devotions, do my usual warm-up before class, get candy from the backstage candy basket and pray before I go onstage.”

Hobbies: “Baking and blogging about my baking (@waltzoftheflours).”

Favorite food: “Literally any food at all – if it’s edible, I probably like it! But I’m a sucker for dessert.”

Favorite role to date: “Arabian in The Nutcracker.“ 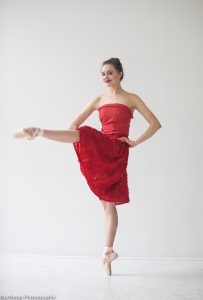 How do you think you’ve grown as an artist during your time in the PBT School Graduate Program? How has it prepared you for a professional position?

“I definitely feel as though I’ve grown through my years as a grad. The performance opportunities prepared me for the schedule and atmosphere of company life. And because we are training every day, our technique obviously improves over the course of the program. But I think the biggest growth I experienced wasn’t technical, actually. I spent most of my second year and part of my third year here out with injuries. Before that happened, I was placing all my personal worth in ballet – not eating enough, struggling with body image and putting unhealthy pressure on myself to succeed – so I basically fell apart when I lost ballet. Thankfully, God used that low point bring about major growth in me. I came out of the experience physically, spiritually and mentally stronger than I’d ever been. Essentially, I realized that there’s more to me than ballet, a realization that actually made me a better dancer and person – and a realization that every dancer must make in order to avoid burning out or beating themselves up to the point of losing their joy for this art.”

Describe your ballet “epiphany” – the moment you knew this was what you wanted to do professionally.

“I don’t recall an exact moment when I realized that I wanted to make a career out of ballet. However, there was a period in middle school when I had to take some time off for a foot issue, and I remember realizing so quickly how much I missed dance. I realized that I didn’t want to live a life without ballet if I could. From then on, I approached it with a new intensity and trained with the motivation of dancing professionally one day.”

What are some of your personal goals for your first season as a company dancer?

“I think a constant goal for me that comes to mind is increased strength and control, specifically in my feet and ankles. I have very hyper-mobile joints, and getting them as strong as possible has always been a struggle for me. But beyond that, I hope to grow in my artistry – really begin the process of maturing in my dancing. Now that I am not a student, performing will be my job, and I want to go into next year with that shift in mindset. A final goal I have is to positively influence the students at PBT. Because I’ve been in their position for three years, I can truly understand the difficulties that ballet students face, and I want more than anything to use my experiences for the good of those dancing around me.”

What’s the most fulfilling thing about being a ballet dancer?

“For me, just the feeling of performing on stage is most fulfilling – it’s simply indescribable. The opportunity to really become a character (especially characters with personalities very unlike my own) and to share it with an audience brings me such excitement. Also, accomplishing the physical demands of ballet is extremely fulfilling to me – little victories like finally nailing a difficult turn sequence or finishing a brutal day of rehearsal with my body sore and drenched in sweat is oddly satisfying.”

What are you most looking forward to dancing next season?

“There are so many things! But one of them is performing Giselle again. It’s not only one of my favorite ballets, but it was the first ballet I performed with PBT as a grad student; to do it again but as a company member will be so surreal. I’m also looking forward to the variety of repertoire we’re going to perform next year and the fact that we’re going to have a new Staycee Pearl work set on the company for the August Wilson African American Cultural Center show.”

If I wasn’t a ballet dancer, I would be…

“A baker. I’ve always loved baking, but it became a major passion of mine last year when I had more free time than usual because of the injuries. Now, I create a new recipe and blog post every week. And I’m not vegan, but I specialize in vegan desserts! I could definitely see myself turning it into a job when I’m older and retire from dance.”